Metal Slug Infinity (also stylized as Metal Slug ∞) was a Tower defense, idle RPG developed and published by ekkorr and licensed by SNK for Android and iOS. The game was first released in the Philippines, New Zealand, and Singapore in March 14, 2019 before being released worldwide at April 16, 2019. The game ended its services on September 30, 2021 due to termination of license agreement. 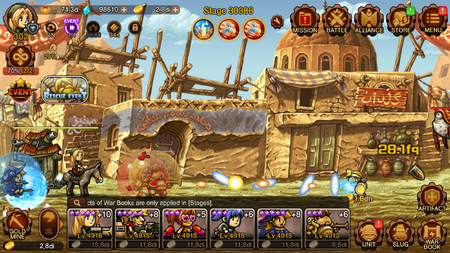 Metal Slug Infinity is a 2D tower-defense game similar to Metal Slug Defense and Metal Slug Attack. A team of six units comes from a base, runs from left-to-right eliminating enemy units, and ultimately destroys their enemy base from the right. Should enemies bypass the player's frontlines (or vice versa), then the player's units turn around to attack the intruders. It being an Idle RPG, the player has little-to-no control over the units' actions. Instead, the player manages the game's various currencies to level up units and Slugs on the fly.

As the player advances through stages, it will become apparent that they're overwhelmed, cannot level up quickly, and slowly stops progressing. Metal Slug Infinity has the Return function, where the player uses the Time Slug to backtrack a number of stages. All units have their level reset, all Gold Mines are reclosed, and the player's gold amount disappears. On the upside, returning boosts the units' stats, increases the gold regeneration rate, and rewards Medals, Gems, Unit Piece Boxes, and Honor Coins. The commander's level is increased to the maximum stage reached divided by 100 and rounded down (e.g. stage 2780 is level 27).

The game continues on generating gold and the units fighting as the player accesses menus, goes into battles, and closes the app. The units will march offline until they hit the maximum stage the player reached. The player can hit the lock icon to active Screen Saver mode. This lets the units fight in the background at usual speeds. The player exits out by tapping on the unit five times.

Upon reaching stage 10,000, aside from the player now fighting Regular Army units, the player enters what is called a Magnetic Storm. The storm lowers battle speed, teleport chance, stimpack (speed increase) chance, and universal unit stats by a percentage. A new Magnetic Storm occurs every 10,000 stages, and all storms are applied together.

While most action is done automatically, the player can tap on the main battle screen to do some actions. Tapping on enemy units, obstacles, and their base inflicts slight damage to them. Activating frontal attacks are done by tapping on a Slug when it is in the middle of self-destructing. Various items and POWs are found on the battlefield and grants bonuses by tapping on them; upgrading Mummy Fio increases the chance of the item being collected without player input.

The game uses a multitude of currencies:

The main bulk of Metal Slug Infinity is in its various submodes used to earn rewards and permanently level up units and Slugs. 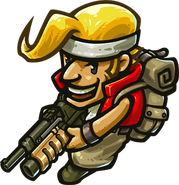 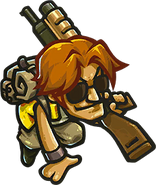 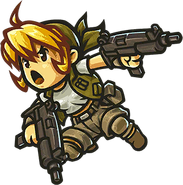 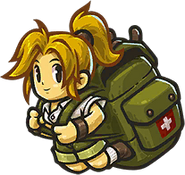 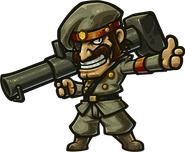 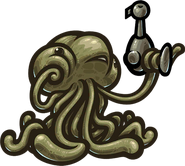 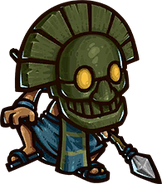