The game supports 4-players in co-op team missions, and it features online gameplay. Players are able to choose from four characters: Leona, Ralf, Roberto and Nathalie (a newcomer), being able to customize said characters with new color schemes. 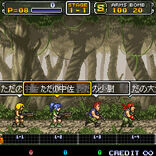 From the official site of SNK Playmore

This article is a stub. You can help Metal Slug Wiki by expanding it.
Community content is available under CC-BY-SA unless otherwise noted.
Advertisement