Neo-Geo, Playstation, PC, Steam
Metal Slug X is a modified version of Metal Slug 2 released in 1999 for the Neo-Geo console/arcade platform by SNK. It was created to fix the original's constant slowdown. The game introduces some extra features like new weapons, rearranged enemy replacement and greater difficulty.

The Dog Mummy makes its first appearance here as well as a few variations of the Mummy that would later appear in Metal Slug 3.

The SV-001 got an upgraded version that is faster and can jump higher called SV-001 Type-R, and the SV-Camel's Vulcan was slightly modified. Metal Slug X also features some new weapons and a new grenade type that would later become a staple in later weapons:

Some classic weapons from previous also got more powerful versions of themselves with greater firepower, indicated by the pulsing letter of their pickup icon.

Some stages were altered in various ways, such as the time of the day (Mission 1 starts at dawn instead of day, for example), enemy, boss and item placement. Slowdowns that plagued the previous version were minimized greatly thanks to the new placement, and various bugs were fixed in this version. Rearranged item placement also enables the fat transformation to appear early in Mission 3 instead of exclusive on Mission 4. Music and sound effects were remixed and improved for this game.

The announcer from Metal Slug and Metal Slug 2 were replaced with a new voiceover, which adds more sounds bytes regarding the new weapons. This voiceover would endure until Metal Slug Advance.

This version have the same tracks than Metal Slug 2, but slightly arranged.

*On the Play Station version of this game, this theme plays on the Dragon Nosuke (Mission 3 Boss) battle.

Facing rebels instead of Arabians in the first mission

Using the Iron Lizard against the Dog Mummies 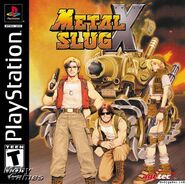