This article is a stub. You can help Metal Slug Wiki by expanding it.

Metal Slug XX Online was a run 'n gun title released in 2017 for iOS and Android compatible devices, developed by CocoBear under license from SNK. Initially released in Arabic, it included all playable characters present in Metal Slug XX, along with a newcomer - Amir. A later global release swapped Amir out for Nadia in other regions.

As all game servers have since closed, XX Online is no longer playable. 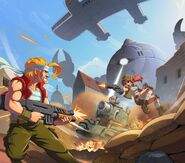