No information
Miharu is a new unit introduced in Metal Slug Attack.

A young, reliable woman in the Ptolemaic Army. She spent most of her life as a wandering veteran mercenary but joined the army once her combat skills grew considerably when Yoshino took her under her wing. Now she commands the cavalry units. Her gun lance was made by the same craftsman as Yoshino's hammer.

Miharu first appears in "Freestyle", where she's battling the Rebel Army with Matilda. The latter keeps referring to her as her pupil, much to her confusion, but Miharu notes her strength in battle. After Grazia retreats with Loretta and Norah upon conjuring several crimson flames, Miharu warns Matilda not to touch the flames or they would burn her to a crisp. As Blaze Brigade retreats, Miharu decides to contact the Minister about them despite the inconvenience it would bring her.

Miharu decides to go on vacation, arriving at a neutral island with some Ptolemaic soldiers. The island is then barraged by boreal matter, sending every human on the island into a trance. Miharu defeats a Rebel soldier while under the effects, before she's complimented by her soldiers. Later on, Nova and Odette encounter Miharu. Miharu's soldiers are torn between following her or Odette, and in a bid to reassert dominance over them, battles the Invader, but is defeated. As she regains consciousness, she recalls spotting a Mars Brain Robot and also compliments Odette's swimsuit.

When Nova and Odette drive the Professor off the island, the boreal matter dissipates for good. Miharu, informed by one of her soldiers that she attacked her own men, decide to smuggle some Rebel soldiers off the island to avoid suspicion. 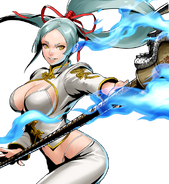 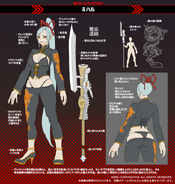 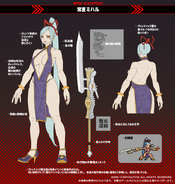