Mantis is a seemingly young girl who is a renowned assassin rumored to have a 100% assassination rate, but she are most likely a newcomer in the industry. She dislikes failure, as she want to maintain a good reputation.

She works for a mysterious corporation to deal with spies and traitors; as this corporation is briefly mentioned in Maya's introduction and in-game description, it is likely that she works in the same corporation as her and Kelly.

In battle, she carries a backpack equipped with the latest in military technology; the pack consists of metal claws to climb around. Upon settling on a target, she unsheathes the pack's mantis-like blades (hence her name) and shreds enemies below her. If the battle becomes too dangerous, she detonate the backpack, spewing out fireballs and flees the area with a wind glider.

First appearing in "United Front the 31st", Mantis is tasked by the corporation to kill Allen O'Neil, which she accepts. Despite being an assassin, Mantis wipes out several groups of Rebel personnel protecting Allen to reach him. She tries to land a killing blow, but her blades are ineffective against Allen's muscles. Despite the obvious failure, Mantis tries to continue fighting, only to be reminded by Beatriz that she has no chance of doing so and suggests that she leave. Seeing no other choice, Mantis reluctantly complies and leaves the scene, upset with the failure. 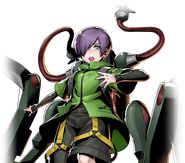 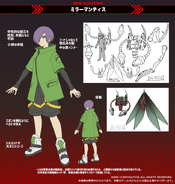