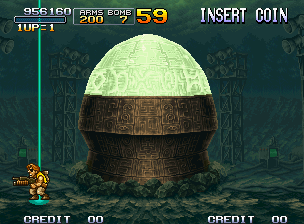 The Monoeye UFO is the boss of the second mission of of Metal Slug 3.

This strange artifact of extraterresial origin was an ancient UFO created to serve as a beacon for the Martians. It is guarded by Monoeyes, who will come out to defend it from hostiles.

It is filled with strange energy that can transform humans into mindless zombies, who can spread the disease to others with fluids.

Before fighting this boss, the player must first defeat the Monoeyes that protect it. After that, the spaceship will show itself. Its only attack is to illuminate its core, summoning monoliths with alien runes inscribed on them to fall from the sky above the player.

Before landing, a targeting laser will be zeroed on the player, indicating a planned landing spot, giving the player a moment's notice to get out of its way. After impact, the Monoliths will slowly sink into the ground. Shooting them will make them sink faster.

However, as the ship receives more damage, the monoliths will begin to drop faster until it becomes very difficult to dodge.

The Monoeye UFO appears as a boss in Metal Slug Defense in missions 86 and 90. Now it can rapid drop Monoliths at the enemy.

The Monoeye UFO appears as a boss in Metal Slug Attack, appearing in the "Clash of the Worlds" Extra Ops, functioning much like its Metal Slug Defense counterpart.