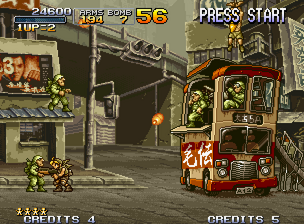 The Morden Bus or Double-Decker Bus is a civilian vehicle that was captured and repurposed by the Rebel Army.

The Morden Bus is a regular double-decker bus from Hong Kong used as a roadblock due to its size. As such, there is no way of going over it until it is destroyed. The Rebels modified the upper portion of the bus to allow troops to pass through and use it as an attacking point.

As the Double-Decker Bus continually receives damage, parts of the bus are seen falling off. Various item crates are rewarded once the bus is fully destroyed.

The Morden Bus first appears as an enemy unit in the game's Combat School. The playable version debuts in the "Last Resort" Extra Ops. Unit parts are randomly rewarded by rescuing prisoners in Stage 2 of the Ptolemaic Another Story "Inheritence".