The Morden Robot is an enemy from Metal Slug 4.

The Morden Robot is a robot with an uncanny likeness to Donald Morden. It was created by the Amadeus Syndicate to fool the Regular Army into believing that Morden was taking direct part of the White Baby Crisis. While the one driving the Iron looks and behaves like Morden, those inside the communications facility wear blue uniforms. All robots use a bazooka as their main weapon.

The Morden Robot only appears in the final mission and behaves like any other Bazooka Soldier. After enough damage has been dealt to him, an airbag from his back will explode and heavily damage him. At this point, he will limp around the arena. He is still dangerous once ultimately defeated as his body will emit electricity that can electrocute the player. He will eject his head onto the floor which explodes and kills upon contact.

They are only found at the last corridor of the final mission. One appears at the entrance to this corridor, and three appear in a group near the end of the corridor.

The Morden Robot is a solid unit with decent damage, HP, and production speed. Upon death, the Morden Robot reveals its true form, and will move like a zombie for several seconds before firing its head at any foe within normal-long range creating an explosion before the headless body detonates as well damaging any foes in range.

A Morden Robot dressed to the likeness of the real Morden operates The Iron according to its description in this game.

Although Morden Robots generally have a bland personality, a particularly interactive Morden Robot was encountered by Rita, piloting a Prototype Iron II. It put up a good fight against Rita, but was eventually defeated. Despite setting off a self-destruct countdown, it was hopeful for the future.

The Morden Robot is seen operating the Iron II, Prototype Iron II, and the Amadeus Hi-Do.

Golden variants also made an appearance in "United Front the 7th", which attempted to self-destruct into Regular Army forces after realizing the mission was a failure, though the effect was minimal due to Perche and Molly's intervention. 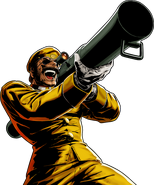