Nikita is an officer of the Regular Army who loves feeling superior to others. She has strong leadership skills and the ability to read people. Nikita is also a speedy and flexible tactician. Her prowess lets her rise up the ranks rather quickly, which the top brass has trouble keeping up with her.

Despite her talent, Nikita's often treated as a child due to her appearance and small stature. She attempts to preserve her dignity by carrying a baton.

Nikita is a member of a famous and rich family but refuses to rely on them. She prefers to put in the effort herself.

In battle, she rides one of two tanks; a customized Di-Cokka, which possesses a "Solanoid" Cannon which functions much like the Tani Oh's Andro Cannon. The other tank is a modified Iron Iso called the "Blue Tiger", armed with a Neo-Andro cannon that fires energy shots at enemies. Regardless of the tank she uses, should the situation become too dangerous for her, she flees via calling a helicopter, setting her tank to explode.

Nikita does not make her first appearance in-game until "Gray Tiger" where she leads a patrol alongside Claudia when they come across strange piles of scrap. When Claudia suggests the enemy is playing with them, she decides to play with them. They catch up to the scrap's owners, the Ptolemaic Army, where she prematurely ends the battle by firing her Blue Tiger's Neo-Andro Cannon. She becomes pleased when Claudia remarks that she's good at her job.

Nikita dresses up as a zombified commander for the upcoming Halloween party, having watched many movies to get the details right. She is one of the four "queens" of Halloween, the other three being Beatriz, Alma and Simon.

During the party, she sprays the participants with a zombie serum developed by the Amadeus Syndicate, though she starts to panic with Alma when Beatriz arrives with amnesia. She tries to stall her superiors, who are searching for the serum. Despite her efforts, she is eventually defeated, but Marco praises her ability to command zombies despite communication issues.

After her superiors defeat Beatriz and use the antidote to cure themselves of the serum, Marco reminds her to always keep her company's status during a mission, since she almost turned them into zombies for good. 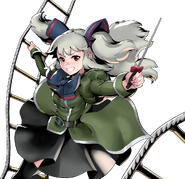 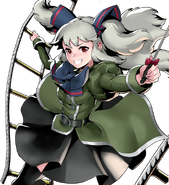 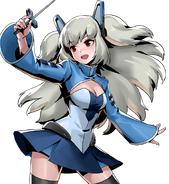 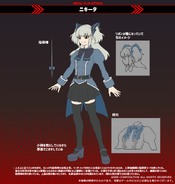 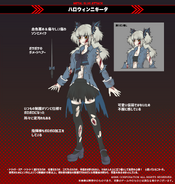 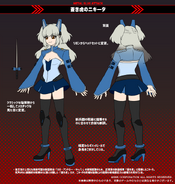