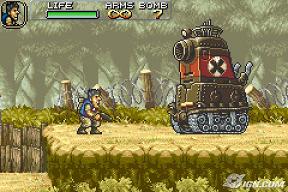 The Nop-03 Sarubia is an enemy vehicle in the Metal Slug series. It is a Rebel Army heavy tank designed to function as a barricade.

The Sarubia is a heavy tank designed to block out invaders with its tall frame. Its frontal armor is well protected, and is armed with a cannon that fires spherical shells. However, due to the high location of the firing port, the tank's chassis suffers from heavy recoil, and as a result, the shell fired loses most forward movement and falls out of the cannon, rolling listlessly along the ground.

Its main attack's sole purpose is to keep the player busy from avoiding the rolling shot, so that its allies can easily kill the player.