A shapeshifter, capable of transforming into anything it has seen. Nowan has no idea what its original form looks like, however, nor any idea as to its own identity.

Its earliest memory is of seeing a large beast, which it promptly transformed into and then believed itself to be. Sometime thereafter it encountered a beautiful young girl - transforming again, the startled original demanded it to relinquish her form. This confused the shapeshifter. "I could do that, but then what would I become?" It realised it didn't know its own shape, and asked the girl who it was - "No one!" she cried, a label it subsequently took as a name.

Although even Nowan doesn't know its own gender (or even if it has one), they are referred to as male by other characters; however, in their special variant, the game describes them as female.

They have a sharp tongue and generally have little regard for their allies, abandoning them at the first opportunity if they will not be reprimanded for it. Odette is the only one who appears to understand them, and despite their general hostility, appear to tolerate her the most out of the other Invaders. Nowan's favorite Invader is the Et A Omnis, due to their shared ability to mimicry. They are quite proud of their mimicry, calling it an ancient space art.

Nowan is the most skilled mimicry in the Invader army, capable of transforming into anything with just a single glance, such as people and even complex machinery like the Sand Marine. They are also capable of dividing themselves into numerous fissions that they have complete control over (including their vision, allowing Nowan to cover more ground) though the strength of these fissions appear to vary depending on how much mass is put into it. When they transform into other people however, Nowan's identity is easily compromised as they never account for the behavioral cues of the people they transform into.

First appearing in "Butterfly Disaster", Nowan reluctantly accompanies Fedeln Metzelei to Earth. When Fedeln accidentally releases his poison, Nowan chastises him as he almost melted through their anti-body suit that Annette gave them. Upon encountering Ptolemaic forces and being wounded by Caroline, Fedeln allows himself to be hit by gunfire, prompting Nowan to reluctantly save them as Annette would lecture them otherwise. As they leave Earth, Fedeln asks Nowan to accompany him again next time, which they flatly refuse.

Nowan later accompanies Odette to Earth for unknown purposes, where they run into Little Lady Black. Unaware of AI technology, they assume Earth is just a savage civilization that's lagging far behind from their own and battles the Ptolemaic AI. Though Little Lady Black unleashes a multitude of attacks on Nowan, they appear to take no damage from her attacks due to their numerous fissions. They later withdraw when Odette becomes concerned for their safety, even though they tell her they are fine.

Nowan returns to Earth with Rillacle and the ET A Omnis, though they become quickly irritated when Rillacle attempts to compare it to Schwarz. They then attempt to state that mimicry is an ancient space technique, but realize that she has no interest in listening and dismisses them. The two Invaders are then captured by Jane Doe, but Nowan reveals that they anticipated her strength and moved most of their mass away, abandoning Rillacle as they depart Earth. Nowan is annoyed by Rillacle's attempts to escape after she causes herself to get stuck on their fission.

They later make a brief appearance in a flashback where they wonder why Schwarz and Bloom Metzelei are accompanying them as they aren't a Metzelei. Through this dialogue, it appears that Nowan also caused an incident that made Bloom dislike them.

First appearing in the story "What I Need to be Myself", Nowan approaches Odette under the guise of Annette, teasing the short alien - much to her annoyance. On their mission to Earth to spy upon a Rebel Army base, Nowan becomes bored and attracts unwanted attention by causing havoc inside of it. They are soon apprehended by Allen O'Neil and son, after failing to convince each that they are the other.

Odette telepathically communicates with them and insists on a rescue, despite their warnings of a trap. She fails, and both are imprisoned, to be informed that Navy (the then-chief scientist) has decided to experiment on Odette first thing in the morning. Overnight, Nowan covers their sleeping companion and takes on her form, but as they are led away, Annette arrives to their rescue.

In "Fall of Disaster", a part of Nowan's past is revealed where they were an inhabitant of an unnamed planet that was invaded by the Invaders. Nowan was taken by Schwarz Metzelei to be consumed later, but they somehow managed to escape and found enlistment in the Invader Army. Annette later paired them with Schwarz, bringing back unwanted memories which Odette was concerned with. Schwarz met Nowan, having forgotten about them but soon attempted to eat them as their erratic behavior reminded her of prey. However, Odette came to their rescue and they crash-landed into a Rebel facility. Nowan became conflicted in their mind but eventually resolved to save Odette, doing so by finding a spaceship strong enough to break the barrier generated by Schwarz's spaceship. 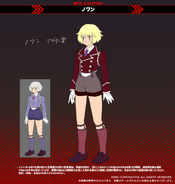