Oao-One is a new character introduced in Metal Slug Attack.

Oao is an ancient omniscient weapon/being with knowledge of ancient races that used to reside on Earth. It was sealed in some ruins by a brave man, where it remained until Ptolemaios recovered it. It takes on the form of a young, seemingly indifferent girl. Given that it has similar markings to the D-Gu, it is likely that the two are tied in some way.

In battle, Oao uses its weapon system to launch spiked wires to impale the enemy. It is also capable of analyzing and adjusting itself accordingly in an instant, making it a formidable opponent.

First appearing in "Space Wars", Oao wanders around an Invader facility and finds a Blobsphere opposing it. It manages to take down the Blobsphere after analyzing its strengths and weaknesses, stating that the next one that appears will prove to be no match as it knows all about it. Oao then senses Dragunov's presence and quickly subdues her.

Sometime later, she enters some desert ruins where she runs into Cica and Arsinoe. After analyzing Cica's Koschka, she states an intent to copy it. Cica, fearful of what would happen, flees the scene as she starts downloading. To both Oao and Arsinoe's surprise, she ends up downloading cat sounds. 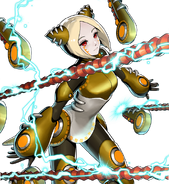 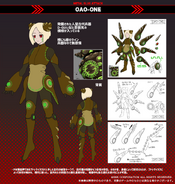