Odile is a new character introduced in Metal Slug Attack.

Odile is a former part of Odette who split off in an unknown incident. The part that would eventually become Odile was left on Earth; Odette doesn't appear to have known that she had partially split.

As a result, Odile was left to fend for herself. El Dorado would eventually find and took her into his care. Though he knew she was an alien, he did not mind and Odile accepted his offer to stay. Like Odette, Odile is curious about humans and shares a similar appearance to her. However, when she starts fighting, her personality changes and she doesn't stop until it's over. This eventually caused her to grow a horn and a tail in the process.

Unlike most of the other humanoid Invaders, when Odile dies, she bursts into gray flames. She enjoys seafood.

First appearing in "Try Line 7th", Odile accompanies El Dorado to a desert town that has been harassed by the Zoni Doloma. When she meets Kelly, Odile is surprised to see she is different from El Dorado, who informs her that humans come in different ages, gender and even race. After the operation starts, Odile takes Kelly with her to fight the Zoni Doloma and easily kills it. She learns a valuable lesson from Kelly and appears to gain a liking to its flesh.

Sometime later, Odile is asked to serve as Swordeist's guide on Earth, who came to find and battle the swordmasters there. Swordeist's chatty personality and attempt to attack a Flying Hermit prompts Odile to fling her from her responder unit, expressing an intent to eat the creature. El Dorado stumbles into the two and commissions Odile to fight the Flying Hermit and its Rain Jellyfish, who agrees so she can spend the coins to buy crab meat. After the mission, she takes Swordeist's coins for her own and would end up traveling all across Earth to guide the alien swordmaster. 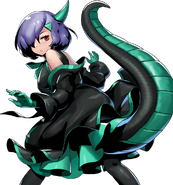 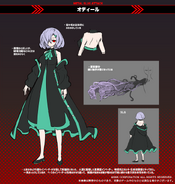 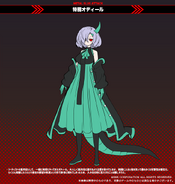