Olga is a new character introduced in Metal Slug Attack.

Olga is a hot-headed woman who has a similar appearance to Destrade. She wields a massive pair of electrified gauntlets in battle and enjoys fighting when given the chance.

First appearing in "Search & Destroy 2nd", Olga reports to Dion that she saw a tank and demands to get it, having spotted it when she was about to spar with Destrade. As they head off to find the tank, they run into Leone and Halle. Olga wonders why Leone is with the Martians, having heard some of the story. She manages to catch up to the tank and apparently debilitates it, but in her haste she fails to realize it was a feint and is caught in its tentacles. Fortunately, it senses Leone and Halle and flees. Olga then tries to get a clearer story from Leone, but her hot-headedness prompts her to accuse Halle and Pocke of intimidating her before the former ACE candidate could respond. After they are picked up by the Rugname, Olga promises to "save" Leone from the Space Army and leaves with Dion. 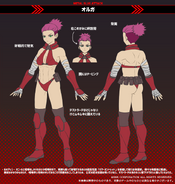