A human carrying a rare lycanthrope virus, Otto has slowly transformed into a werewolf-human hybrid over time as the virus ravaged his body. Having to resort to desperate measures to survive, he occasionally eats several humans, though he never kills them, but appears to have self-guilt each time he does so. He is experienced with smelling blood and can easily tell who is coming or the person's mood.

The vampires constantly hunt him down as lycanthropes are their ancient enemy. Due to this, he rarely shows his face in public.

While on the run from the vampires, Alma saved him during an unknown incident. Grateful for the rescue, Otto helps out in her experiments whenever she needs his assistance, though the time he spends running from the vampires often means he arrives very late.

Due to the lycanthrope virus, Otto's skin has hardened significantly that he can take massive amounts of punishment, and even heal himself quickly from such wounds. In battle, he uses his claws to shred the enemy, and can turn into a full-fledged werewolf temporarily if needed, where he uses the cover of the shadows to rip apart any unfortunate enemies.

First appearing in "Under City", Otto saves Alma from being captured by the Ptolemaic Army after her "Catifier" goes awry, where he states that she makes medicine without knowing how to make it. Alma chastises him for his lateness as she was waiting for him a week ago, but he simply states that he was simply travelling. Otto helps her take down a Deep Blowfish and rips off one of the driver's arm and leg to eat, much to Alma's surprise. He doesn't take her joke lightly, but with the job done, she offers to buy him some drinks at the local bar. He declines her offer, as the battle will certainly attract the attention of the vampires, and tells her not to contact him for a while before departing.

Otto's suspicions become true, as Agalia and her servant arrive to the battlefield moments later, where the former catches a whiff of his scent.

Alma eventually calls him in for another favor, and Otto arrives. He reminds her not to mess up the speech Amadeus gave him, or he would place more budget cuts on her department. Alma attempts to read from the script, but an upset Iron Fortress barges in and attacks the two with a missile, which Otto takes by shoving Alma out of the way. Alma barely manages to calm her down, but First Baby arrives and Iron Fortress throws a tantrum by launching more missiles, which overwhelms Otto as he attempts to shield Alma, though both survive the attack. After they recover Iron Fortress, Otto reluctantly helps Alma move into her new room that Amadeus gave her as punishment.

Still on the run from the vampires, Otto surprises Fio and Eri as they stake out a vampire, telling them that this vampire is working alone. He then smells another vampire coming, witnessing the arrival, Sharl, apprehend the rouge vampire. He helps Eri fight Sharl, but Sharl easily crushes Eri's Slug Trolley. Eri refuses to back down, and Otto, sensing from her blood that she is going to die if she continues to protect him, flees, prompting Sharl to chase after him.

When Iron Fortress goes on the run, she encounters Otto, who is badly wounded while fleeing from Agalia in a losing battle. He states that he's simply using the Syndicate as a means of survival, but Iron Fortress questions his statement, as he wouldn't have to tell her that if he actually meant it. Alma then arrives and injects him with a serum, prompting him to state that she's crazy for doing it randomly. 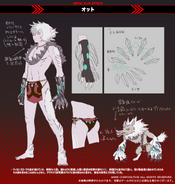 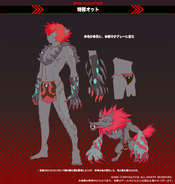