No information
Owen is a new character introduced in Metal Slug Attack, making his debut in the Extra Ops "United Front the 4th".

A Ptolemaic Army guerrilla captain, he is a strong leader and is looked up to by his allies, who call him "Colonel" Owen. He is fairly thoughtful and laid back, telling Dragunov that their ranks are just "titles".

He uses special gauntlets to attack his enemies.

Dragunov, suspicious of Ptolemaios and Mira's hidden agendas, tasks Owen with spying on Mira to see if she is doing anything suspicious in "United Front the 4th". He also told her that he picked up someone in his travels. Owen makes his way to Mira's last known location where she is seen attacking a Rebel facility alone.

Marco was also at the facility, attacking the base with a newly built "Golden" Slug Gigant after the Rebel Army had attempted several worldwide attacks which were barely repulsed. As Owen arrived at the base, he saw several black flames in the distance which he immediately knew was Mira's. However, he bumped into Marco, and fought him because he was in his way. He easily destroyed the Golden Gigant and was about to finish off Marco when he saw Mira's flames in the distance. He warned Marco that he was lucky to be alive before departing. Mira had anticipated Owen's arrival and knew what he was there for, which Owen tried to deny. He asked her what he was planning to do with the dead soldiers, but Mira cryptically stated that he would know in the future before teleporting away.

When the Ptolemaic Army begins their attack against the Golden Kraken during "United Front the 13th", Owen accompanies them to assist the rookies participating in the battle.

After this operation, during "United Front the 14th", the Ptolemaics developed a golden version of "Deneb". Owen entrusted the machine to a petty officer as part of his orders, though he does not state why the officer is allowed to drive it when he asks him. When the operation is finished, Owen speaks with Dragunov about the battle. Owen felt that someone had been watching him. Dragunov tells him that it's because he's a good leader, and jokingly says that surely there mustn't be anything he doesn't want photographed, but he tells her that it felt like paparazzi, which he was not comfortable with.

Later, in "Gray Tiger Extra Ops", a Ptolemaic soldier informs Owen as they approach the battlefield that the Armored Crawler is breaking down and needs repairs. He calls over Simon and tells her to get the Black Sniper into position while the vehicle is being repaired. Claudia asks Nikita if they should charge at them, but Nikita takes a glance and tells Claudia to get her shield ready, as she suspects snipers in the area. She also wants to get some of the scrap, so Claudia agrees to give some to the rear guard as they initiate the battle.

Simon remarks that the Regular Army's defense is strong, while Owen tells her that she'd better get used to issuing orders and to have her division officers surround the enemy. Nikita orders Claudia to rush the commander, intending to use her Blue Tiger against the enemy snipers as her subordinates protect her. Claudia rushes Owen, but their fight is short-lived as Nikita launches the Blue Tiger's Neo-Andro Cannon everywhere, inflicting immense damage to the enemy. The Regular Army soldiers crawl and cover themselves with shields, while Owen calls for a retreat.

Following a Ptolemaic rebellion, Owen finds Veronica and Sisilia at the remains of the base, and immediately tells the two to come with him if they wanted to survive. He is aware of Dragunov's rebellion, but appears to remain neutral in the conflict between the army and the cult. 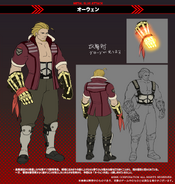