A young woman serving in Allen Platoon, Padwah had participated in an operation, accompanied with heavy equipment when the airship transporting them missed their target. To make matters worse, the heavy equipment also ran out of fuel and stopped working. She was motivate her fellow soldiers by grabbing the wheel of one of the tanks as a weapon, leading them to victory.

She continues to use said wheel as her primary weapon, using her strength to carry it around with ease. She later added flamethrowers to her weapon to turn it into a spinning wheel of fire. She emphasizes the importance of mobility for her success, stating that even the greatest of weapons are useless if they can't move.

Padwah has relatively poor social media skills, but she is not particularly interested in the matter, expressing confusion as to why smartphones are all the rage these days and that she doesn't envy those engrossed in them.

First appearing in "Try Line 16th", Padwah stumbles into Caroline following a massive battle between the Rebel and Ptolemaic armies, with the young mechanic arriving to collect machinery. She appears to start off on good terms with her as they share the same belief as she helps Caroline load a Cabrakan engine onto a nearby truck. Towa soon arrives to inform Caroline that Padwah is a Rebel Army soldier. In response, Caroline unleashes the Screamer, but Padwah remains unfazed by the attack. Seeing that Caroline values machinery over physical strength, she accepts Caroline's challenge to prove her that physical strength means everything.

Padwah destroys Caroline's screamer with ease, before proceeding to destroy her remote control. Remembering that Caroline had an outstanding warrant for her escape, Padwah then apprehends her. Towa willingly goes along to accompany Caroline, so Padwah takes the two young mechanics and the Cabrakan engine back to a nearby Rebel facility.

Padwah later accompanies Sylfie on an attack against the Regular Army. She has trouble catching up with her social skills, but when Sylfie notices that her sister has fainted from hunger, she orders Padwah to speed up the operation, allowing her to not hold back in battle. 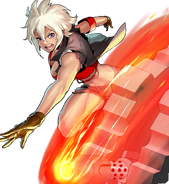 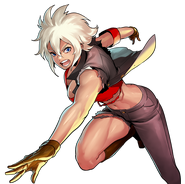 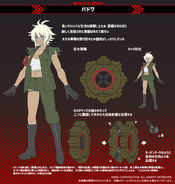