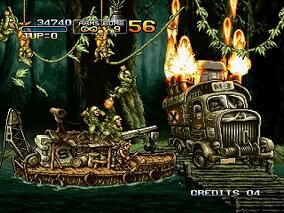 The Parachuetruck is a large support van used by the Rebel Army. It is introduced in Metal Slug 3.

The Parachuetruck is used to bombard an area with several volley-bombs under parachutes, and then are able to deploy Rebel soldiers by launching them with the launchers above its roof. The Rebels drop down to mop up any remains of the area after being devastated by its rocket barrage.

In the 1.29.0 update, the Parachuetruck appeared as a defensive unit. Its only attack is to launch bombs directly in front. It was originally a very overpowered unit because of its cheap AP (250 AP), relatively quick production cooldown, very high HP, ridiculously high attack power, and consistent damage penetration through enemies.

It got nerfed in the 1.30.0 patch. Its production cooldown is slower, the miner's speed to deploy one takes four hits to build, and the bombs it fires now explode upon contact with enemies.

It appears again in the 2.0.0 update in the Extra Ops "Power of New Versions". Its cost is raised to 440 AP (on a bronze frame). Its attacks are the same, except for the attack range of its special attack, which can be increased by unlocking its 4th skill.