Having conversations in strange places

Parker is a recurring NPC from Metal Slug.

Parker works for a Japanese game developer. He works mostly promoting the company's games around the world, always carrying some AES cartridges, a catalog of new products and a set of memory cards inside his briefcase. However, Parker is a little distracted and usually ends having his briefcase stolen (by the player, as a pickup for some bonus points), making him blame whoever he was talking with. Usually it is some delivery boy, who runs away crying, emotionally scarred for life.

When not promoting his company, Parker appears in the middle of the battlefield trying to make a conversation. Sometimes, he is randomly seen out in the open (Metal Slug: Super Vehicle-001); other times, he is a reward from a POW (Metal Slug 6 and Metal Slug 7/XX). Parker acts as a collectible item, although he is worth zero points when collected. He disappears if left alone. 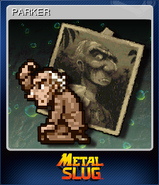 Parker's suitcase
Add a photo to this gallery

Retrieved from "https://metalslug.fandom.com/wiki/Parker?oldid=50300"
Community content is available under CC-BY-SA unless otherwise noted.