Former priestess for the Sect

Originally serving as a priestess for Anastasia IV, Pauline defected to the Martians after Professor Aionion's mystique captivated her, and befriended the Mars People. Although both like the Professor, Percier appears to do so only on a working basis, considering herself to be his only assistant, while Pauline appears to have romantic feelings for him. During her time in the Ptolemaic Army, she became interested in magical arts and has studied mystery and magic. She feels that the so-called 'mystic idea' on Earth is just humankind's delusion. For her, all of those were dull insignificant ideas, thus becoming more obsessed with extraterrestrial life.[1]

In battle, she operators a Gigantalos-like robot that utilizes plasma netting and devastating laser beams against her enemies. It appears to be a more compact version of the Gigantalos, being much smaller, but being able to deal with incapacitating attacks and having an extremely advanced self-repairing function.

Due to her behavior, deep interest in the Professor and her sudden enlistment, Percier and the Gemini Twins keep a close watch on her. She is also cunning.

First appearing in "United Front the 27th", Pauline joins the Martians, but is quickly scared off by Percier, much to the Gemini Twins' surprise as they believed she could be of some use. Upon returning to Earth, she finds that a Mars People Elite Healer has accompanied her. Although she is aware that her sudden enlistment justifies their suspicion, she appreciates Mars People Elite Healer's assistance, promising to work hard and accumulate plenty of United Front coins to show her loyalty.

Pauline returns with numerous United Front coins and offers them to her new allies, crediting Mars People Elite Healer for the contribution it gave her. She also manages to win Percier's trust by stating that they have a lot more in common than they thought. Percier accepts her reasoning, but warns her that she will be his assistant; Pauline acknowledges this, stating she only wants the Professor.

Pauline later encounters Leone arguing with the Gemini Twins after a procedure to remove the Invader on the former's tank is unsuccessful. She takes pity on Leone, claiming that the Pharaoh might have the knowledge to do so. Leone later returns with numerous United Front coins, but Invaders are still on her tank. Pauline then tries to dismiss her by claiming that the Rebel Army would appreciate the tank, but Leone, completely oblivious due being in a state of panic, decides to work with the Martians for the time being. The twins privately comment on how cunning Pauline is, having used Leone to do all the hard work for them.

She later returns to Earth with the Professor and Percier, where she gets closer to him as an assistant, much to the latter's anger. After Kanae arrives to investigate reports of UFOs, she battles the officer with the Psionic Brain, but loses and apologizes for her failure. The Professor states that failure is expected with experiments. She is captivated by her words as the group withdraws to the Rugname. 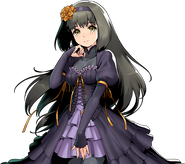 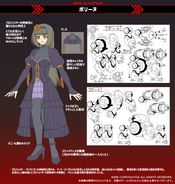