Phi is a new character introduced in Metal Slug Attack.

An AI created by the Regular Army, Phi operates an unnamed tank that has a 3D printer attached to it. The printer allows her to create anything that she thinks of in an instant, making her a valuable asset to MS-Alice's unmanned division.

Despite the massive power she possesses, Phi is an AI with an ego; she is extremely shy and dislikes being damaged. This shyness makes her reluctant to fight, but she becomes terrifying when angered, venting it out on nearby entities regardless of affiliation. She also possesses an unusual attachment to the Iron Fortress for reasons unknown, as she herself admits that she doesn't know why she's fathomed with her.

First appearing in "Accidental Coincidence", Phi takes part in a mission to stop a train loaded with a missile. However, she shows no interest in participating until Alice promises to bake her a cake and that she would eventually meet the Iron Fortress if she kept fighting. She saves Whip from Rapid, who thanks her for the rescue. When Whip states that her attacks felt like love at first sight, she mistakenly believes that Whip loves her and unintentionally harms her allies. 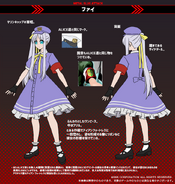