Philia is a new character introduced in Metal Slug Attack.

Philia is a young woman who is affiliated with Esther's tribe. She has a strong sense of will as she wants to protect her friends and family while letting everyone live their lives in peace. Like Esther, she also has an animal companion; a jellyfish named "Slim" who serves as a floating umbrella for her.

In battle, Slim handles all of the work, attacking with its tendrils and launching poisonous shots on enemies from above.

First appearing in "United Front the 41st", Philia overhears of an impending Ptolemaic attack. Wanting to help ease Esther's burden, she decides to fight alongside her. Knowing that she alone would not be able to contribute much, she also activates a United Front signal which is received by Elysion. Due to this, the natives are able to repel the Ptolemaic Army and Esther thanks her for her valuable contribution. Knowing that she did not deserve all the credit, Philia personally thanks Elysion for her help and promises to help lift her curse no matter how long it would take and is unfazed by the threat of death should she fail, much to the ghost's respect. 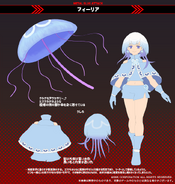