Ptolemaios is an unused boss from Metal Slug 5, and a playable unit in Metal Slug Attack. He is the commander-in-chief and cult leader of the Ptolemaic Army.

Ptolemaios was supposed to be the native who was struck by lightning in the first stage cutscene and possibly the main villain from Metal Slug 5.

The tower has plenty of animations, most of which are lasers, spinning bits and pieces, and lightning. There are only two animations of the actual tower-rider: him looking forward, and him looking to each side (left and right). There are also a lot of debris sprites that probably would be background elements.

While no official reason has been given to date, SNK may have scrapped this boss due to time constraints. However, he made his official appearance in Metal Slug Attack, first appearing in the Extra Ops "Ptolemaic Attack".

Ptolemaios' tower was created using Sol Dae Rokker's red crystal, and it resembles the latter's boss arena (with the two statues being similar to each other). The greenish crystal fires gray orbs, and the bottom base shoots lightning strikes. The center of the tower is retractable, and the insides spin to summon Rosetta stones or balls of energy.

Ptolemaios is extremely secretive, as only the inner circle of the cult branch commanded by Mira seem to be aware of where he is. In the standard Ptolemaic Army, no one, not even the top commanders, know of his location or plans, just trusting in his promise for eternal life. He gives orders to its military through messengers and rarely appears on the battlefield. He also believes that everything is pre-ordained and that it cannot be disrupted, as doing so will cause dire consequences.

Ptolemaios has an extremely negative chemistry with the Red Goblin Society and single-handedly destroyed the group. With the society's leader, renamed Red Goblin, as the sole survivor, Ptolemaios commands his army to search and eliminate the leader.

Every time Ptolemaios dies he somehow revives himself with higher strength. He tends to swallow stones whole to gain powers. In an alternative timeline, Ptolemaios is powerful enough to be considered unstoppable as he is able to lower the morale of an entire army. It is later revealed that Mira is his daughter from the future, though his wife has yet to make an appearance.

The Red Goblin seeks to avenge his fallen society in the Extra Ops "Ptolemaic Attack", which Ptolemaios had destroyed. At the end of that Extra Ops, Ptolemaios is killed by the Red Goblin.

He does not make an appearance again until the Extra Ops "Signs of Curse", where Ptolemaios revived himself through an unknown method, though it cursed him. He arrives back at the base, where his soldiers are happy to see their leader again. Annette confronts Ptolemaios and his Special Forces soldiers, and defeats him. It is unknown what happened to him afterwards.

In "Royal Identity", Ptolemaios tasks Mira with stopping a Rebel Army advance. A masked soldier is suspicious of Mira, though Ptolemaios assures him that she is on their side. When Mira drives the Rebel Army away, the masked soldier becomes terrified of her powers. Ptolemaios believed that Mira did fairly well and that she has given him additional time. He then tells the soldier not to worry about Mira, as she won't betray them.

It is presumed that the events of "Royal Identity" strengthened Ptolemaios, as in the Extra Ops Cross Over Fate, Ptolemaios becomes incredibly powerful, harnessing the power of the Avatar of Evil as Abyssal Ptolemaios. This Ptolemaios travels through time to the past, to prevent the future from being changed by Elena and Licht after the two decide to go to the past to stop him before he becomes unstoppable.

Ptolemaios continues to gain more strength as the war intensified, soon being able to return to his younger form, using Mira's powers, but only for a short duration. In his youthful form, he runs into Ralf Jones, who is escorting a Super Cannon Transport. Ptolemaios toys around with Ralf, who demands he unleash his full power. Ptolemaios complies simply to show Ralf the despair he will face, but Achetto runs in and tells him that he will kill Mira if he continues to use his power, so he relents.

First appearing in the story "Ωmegalpha", he is shown in one of the Red Goblin's nightmares. The Red Goblin later confronts and defeats him.

He later appears in the story "Cloak of Darkness", where he relays orders to a masked soldier for the Ptolemaic Army to bolster their strength for the "fateful" day.

Ptolemaios is later killed in another unknown incident, although he is revived by Mira following a ritual which drains most of her Anima. He shows some concern after sensing this, but gladly accepts her offer to claim the world as her own. 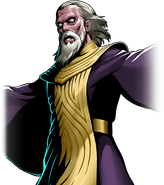 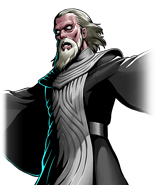 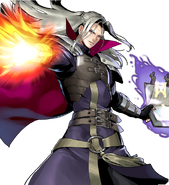 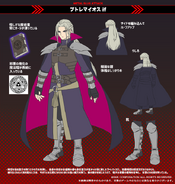