Eating
The Purple King is a new character introduced in Metal Slug Attack.

The Purple King is a duo; the Purple King is the suit, while it is operated by an unnamed Invader, but is an intellectual type that excels at handling parasitic Invaders. Whether the two arrived together or not remains unknown. The Purple King was also an Invader, but was combined with abandoned weaponry of some army on Earth to protect the girl. Due to this, it is essentially a cyborg version of the Mars Gigantalos as it has an extremely similar combat style and recovery tactics. The Purple King is quite protective of the girl.

In battle, the Invader operates the suit into battle. One arm chomps at targets to consume them, while the other arm is a living flamethrower.

First appearing in "Try Line 10th", the small Invader lures two Mars People from their spacecraft by pretending to be a seriously injured girl. The Martians are lured into a dark cave where they find the girl, just as two arms wrap around them. The suit then claims that the girl's hungry and consumes both of them. They then set out to search for more prey, with the girl hoping they'll be able to rule Earth before the four Heavenly Kings arrive. After a battle with Midori's Giant Copter, the small Invader decides to spend her Try Line coins to get something for the Purple King to eat.

A while later, the Purple King is seen without its Invader pilot with Franke as the King's Cocoon is laid. It may have affiliated themselves with the main Invader force at this time. The Purple King does not appreciate Franke's jokes and simply tells her to study more to answer her questions. A short time later, they are confronted by Katalina and Eight Eight, a sentient Di-Cokka. The Purple King notes that Eight Eight is familiar, yet less savage and intelligent than it. During the battle, it is blown away with Franke and the cocoon by Eight Eight. 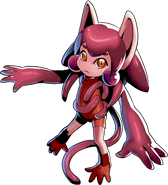 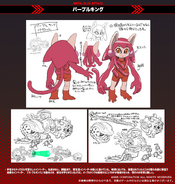