Pursuit is the eighteenth mission of Metal Slug: 2nd Mission. Only Gimlet has access to this stage.

Gimlet takes notice of Lt. Colonel Macba and starts chase on a moving freight train. Whenever Gimlet is outside of the train, he gets pushed back to the left. At one point, track pillars periodically appear on screen that Gimlet has to jump over or take damage. Macba is found by going to the very front of the train and dropping under it. As the mission's boss, Macba jumps over platforms and tosses knives at Gimlet.

Hyakutaro appears here as a hidden mini-boss and POW. He fights with homing energy blasts (which eventually lose their homing capabilities after a few seconds). Once Hyakutaro is defeated, he gives Gimlet the Metal Knuckle. 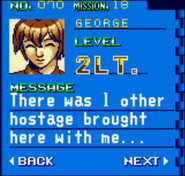 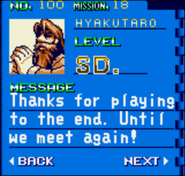