Quaith is the operator of the Tail Slug, a new tank developed by the Metal Device Project.

The Tail Slug is a slim tank that draws power from a rear-mounted battery. It is equipped with numerous missile launches that she can use to bombard fortified locations with ease.

Although timid and docile by nature, she is an avid storyteller, and usually gets out of hand while setting the mood. She appears to prefer horror stories the most.

First appearing in "United Front the 26th", Quaith accompanies Perche, Ami and Ashley in the operation, assisting them with her Tail Slug. Following the operation, Quaith trades in her United Coins for the eyeballs and legs of the Hunter Walkers, telling Ami that she intends to "experiment" with them with a smirk on her face. 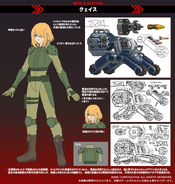