Ralf Jones is one of the playable characters since Metal Slug 6.

Though he is a colonel of his mercenary squad, his background is a complete mystery. Rumor has it that he came from a certain nation's special forces, or that he eradicated some secret society; Ralf shows no interest in such rumors. He does seem quite close to his commander, but no one has any clue as to how they met. He and Clark are brothers-in-arms, and they always go to battle together. He is known to participate in tournament fighting, and his close quarters combat ability far outstrips the average fighter. He is well known for his Vulcan Punch, a powerful salvo of punches powerful enough to kill infantry and destroy tanks. His most prized thing is a medal given to him by the president.

In Metal Slug 6 and Metal Slug 7, Ralf is most skilled with the melee attacks. Not only can his melee attacks cause double damage, he can also use his Vulcan Punch that can destroy even enemy tanks. Ralf also possesses two "lives" for each actual life, being able to survive one enemy hit, although he will die on the next hit or if he falls into hazards. As a result, special weapons he picks up only possesses half as much ammo.

With the exception of Metal Slug Warriors, Ralf's appearances always have Nathalie Neo as a selectable character. Unlike in the main series, Ralf dies in one hit.

Originally as a cameo in the POW list, Ralf appears alongside Clark and Leona as purchasable units in a later update. His close range attack is doing his Vulcan Punch and he uses a Flame Shot for his long range attack. His special is the Galactica Phantom, a ramming single punch that bursts anything on flames upon contact, a move he uses in KOF tournaments.

In Metal Slug Attack, he's first available as a demonstration unit for the game's tutorial. He originally used to turn the VIP crank. Lightning Fio now turns what is a merger between the VIP and Medal cranks.

He debuted as a $100 pre-acquisition unit for the "Mars Attack" event. He later moved to the Medal/VIP crank, and unit parts of him can now be purchased from the POW Rescue Shop. Once his skills are maxed out, his Galactic(a) Phantom produces four fireballs (similar to Jupiter King's) that are thrown in the air and damage enemy units further.

He also has an alternative version called "Crazy Ralf" that appeared in the "Crazy Drive" event. A Ralf red with rage he has the Galactica Phantom as his long range move and his dive punch as his special move. Just like in Metal Slug 6 and Metal Slug 7/XX, he can revive once, if you max out his skills.

A third version named "One-Man Army Ralf" appears in the "One-Man Army" event. He starts out using a suped-up version of a Flame Shot and his Vulcan Punch is replaced by an uppercut. However, by unlocking his third skill, he is able to revive, his stats are boosted in revival, and his 2nd form acts similar to Crazy Ralf with stun immunity.

First appearing in "Mars Attack", Ralf and the Regular Army are battling the Rugname. In "Crazy Drive", Ralf is defeated by the Iron Cab. Enraged by his defeat, he returns angrier and eventually destroys it before Heidern arrives and returns him back to normal.

Later on, he partakes in an operation with the Ikari squad. Heidern is wounded by a grenade and Ralf manages to calm down Leona, whose Orochi blood activated after she assumed he was killed.

Ralf later appears in "One Man Army" where he is stationed at an island base with his soldiers and Reika. When Schwarz Metzelei injures Reika, Ralf becomes enraged and initially overwhelms the Metzelei before Franke recalls her as their operation is a failure.

Sometime later, Ralf accompanies a Super Cannon Transport when they are ambushed by Ptolemaios. Ptolemaios toys around with Ralf, who becomes enraged and demands he unleash his full power. Ptolemaios complies, but Achetto arrives and urges him to reconsider as he would kill Mira doing so. Ptolemaios refrains from unleashing his full power, but even using a fraction of his power meant that Ralf and his soldiers are helpless as the Ptolemaics seize the Super Cannon.

During Christmas, Ralf accompanies Leona out of concern and the two end up accompanying Rumi Aikawa to a party venue hosted by Marco. On the way, they unintentionally run into Abigail and the Rebel Army, who had been trying to avoid them; the snowmen soldiers Abigail had set up beforehand had all been incapacitated by the pair, who had believed them to be mercenaries hired by Marco. Ralf damages the Iwa Oh, but becomes horrified when he learns that children had been inside, as he would have refrained from such attacks if he knew. He is referred to as "scary" by the children for his appearance and spends the whole day playing with them. 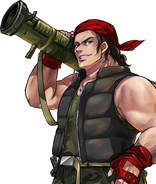 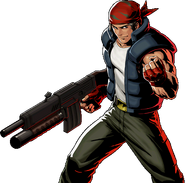 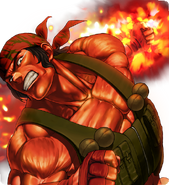 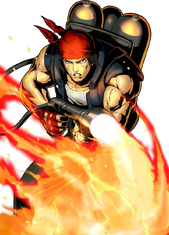 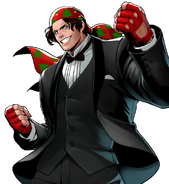 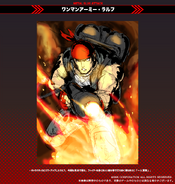 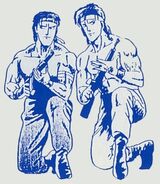 Ralf and Clark in Ikari III: The Rescue

Ralf in The King of Fighters Neowave

Ralf in The King of Fighters: Maximum Impact

Ralf in The King of Fighters XII

Ralf in The King of Fighters XIII
Community content is available under CC-BY-SA unless otherwise noted.
Advertisement