Raubtier is a new character introduced in Metal Slug Attack.

Similarly to Odile, Raubtier appears to be unaffiliated with the main Invader Army. It made its way to Earth at an unknown point in time and resides in the oceans, comparing it to space. It is accompanied by smaller offspring which it uses to attack its enemies with.

While it makes swooshing sounds, it appears to be translatable into the common tongue.

First appearing in "Deep Water", Raubtier was wandering around Earth's oceans when it was captured by the Rebel Army and held captive in an underwater base. It sought help, sending telepathic waves to any that could hear it. The call was answered by Leone's Invaders, who proceeded to infiltrate into the facility and free it. 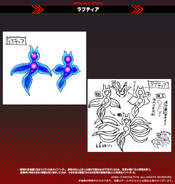