The Rebel Zeppelin is a Rebel aircraft found in Metal Slug: 1st Mission.

The Rebel Zeppelin appears in various missions. In Mission 8 (Forced Escape), it appears in the background firing shots towards the SV-000. In Mission 10 (Night Flight), it briefly shows up in the end of the mission attacking the Slug Flyer. In Mission 16 (Fierce Battle), the battle with Hilde Garn's Slug is located on top of the Zeppelin, although a different one.

The main fight occurs in the end of Mission 10. When the Zeppelin appears in the front, the bottom cannon fires a shot that splits into eight smaller projectiles, the middle cannon shoots three large projectiles that all travel horizontally, and the top cannon fires a projectile in an arc. After a short time, the Zeppelin lowers and charges to the left. In the background, it fires three shots on the left, middle, and right thirds of the screen. The shots split when it and the Slug Flyer are at the same height. The Zeppelin moves back to the front from the upper-right corner, and the whole process is repeated. 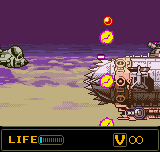 The Zeppelin at the front. 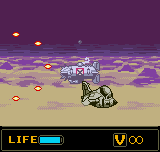 The Zeppelin at the background. 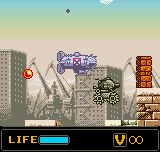 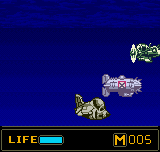 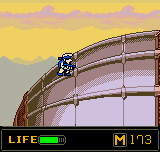 The Hero on top of the Zeppelin in Mission 16
Community content is available under CC-BY-SA unless otherwise noted.
Advertisement