She is a member of the Government Forces' Special Forces. On her way to investigate information regarding the sighting of a UFO at a rebel army base, she discovers that the enemy has made contact with space aliens. But she also learns that a member of PF Squad has also obtained this intel and races for the enemy base alone, hoping she's not beaten to the action.

Red Eye exclusively uses the Bazooka, Fire Gun, and Missile Pod. She is able to save Rumi to receive the E-Armor. A POW is her mission command.

The number below A and B represent the next mission Red Eye takes if she:

On the 1.42.0 update, she (along with Gimlet) appears as a playable unit. She uses a Missile Pod that fires missiles one at a time rather than in a spread. Her sprites have been updated to resemble those from the main series, using Fio as a base but edited to include new sprites of her drinking tea and saluting.

She later reappears in the "Zombie Parade" event as a Pack-Shop unit, now available in the POW Shop. She appeared in the game's promotional art beforehand.

In the "Signs of Curse" event, an Invader named Lydia has been disguised as a purple-vested, green haired version of Red Eye. She accompanies Annette in their mission on Earth, however she has yet to make any story-line appearances. Lydia is able to shoot more missiles than her real counterpart. Originally a Pack-Shop unit, she is made available in the Guild Shop. 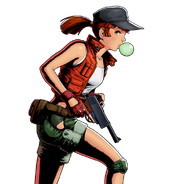