Another Invader soldier, Rillacle appears to be a young and normal girl much like Odette. Whereas Odette uses her abilities to transform her arms into tentacles to attack her enemies, Rillacle uses her "hair" instead. Her "hair" consists of numerous small tentacles that can be used to rapidly attack her enemies. She can also combine all of them to form a massive fist to smash enemies right in front of her.

Unlike Odette, Rillacle doesn't really care about Earth's culture and is more interested in fighting. One of the games she picked up from Odette is rock, paper and scissors, though Rillacle's view of the game is vastly different, where she simply uses "rock" as her default move and smashes her enemies.

First appearing in "Fist Invasion", Rillacle is paired with Odette for a reconnaissance mission to gather information from the Ptolemaic Army's newest Union model. Rillacle blatantly disobeys orders due to her boredom to play rock, paper and scissors with the enemy, clearing out numerous enemies before meeting Veronica and Sisilia. Rillacle easily overwhelms the two officers, who retreat much to her disdain. Odette is clearly disappointed with Rillacle, but managed to obtain the information they needed. She then remarks on how the rock, paper and scissors game Rillacle plays is vastly different from what she saw on Earth. Rillacle wishes to know more about how the people of Earth play the game, but Odette declines her request.

Rillacle is later assigned as Bloom Metzelei's guide to Earth when she decides to visit after hearing Schwarz talking fondly of it. However, she gets distracted and runs off to play rock, paper and scissors with the humans. She asks Bloom to join in, but the Metzelei kindly refuses her request. Bloom doesn't mind Rillacle's incompetence, most likely due to her young appearance.

She soon returns to Earth with Nowan and the ET A Omnis. She believes that it's similar to Nowan because they are from the same galaxy and tries to compare them to Schwarz, much to their anger. Only interested in "playing", she soon runs off before the two get snared by Jane Doe, who wants her "hair". Nowan reveals to her that they are abandoning her, as they anticipated Jane's strength. Rillacle tries to struggle in vain to escape, but ends up getting herself directly next to Nowan's fission, causing them discomfort. 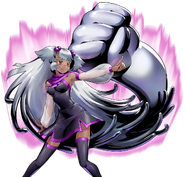 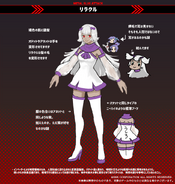