Rita is a new recruit for the Peregrine Falcons Squad, joining at the same time as Roberto. Until she became 18 years old, she was raised with her grandparents in a remote north-east mountain recess without electricity or running water. Originally, Rita was supposed to be listed to a different unit but was recommended to join the P.F. Squad due to her physical capabilities; namely her unnatural strength and sight.

She is rather embarrassed with her country upbringing and tries to persuade suspicious people with her "city" accent and dressing in the latest fashion trends. She can become rather explosive if they keep pointing out the fact that she is a country gal and will not even bother to hide it if sufficiently enraged.

Rita is terrible with long-range weapons but excels as a physical fighter with high prowess of her legs. Rita can dodge enemies by cartwheeling. Midori created special leg equipment so that Rita can eliminate enemies without harm.

She also has a cousin named Rocky, who's also an excellent physical fighter.

She takes part in an attack in "Top Prospect" against Amadeus Syndicate forces. During the battle she encounters a strange Morden Robot and is quickly taken away before it self-destructs when the Iron it is riding is critically damaged.

Rita later takes part in an operation against the Rebel Army. Prior to the operation, she finds her cousin Rocky has also joined and she is delighted to see her cousin again. After Roberto Nicola compliments her and is subsequently sent flying with a single punch, Rita tells her cousin to be less forceful as "city folk" are quite "delicate". After the operation is over, Rita is waiting at the Try Line Shop with Rocky, having been reminded by her cousin to spend the coins before they turn into MSP.

Wanting to catch up with recent trends, Rita is upset that she cannot wield weapons and goes into a short-term depression, feeling useless. Avvio tries to console her by stating that her legs are better than any M.D.P.S weapon. Soon after, both Midori and Rocky appear to console her, the former stating that she'll make a weapon perfect for her, while the latter states that she too was uncertain if she belonged with P.F squad, but some training allowed her to feel more comfortable with the group. Midori creates new leg equipment for Rita, which she uses against Caroline's D-Gu with instant success, although she allows it to leave for a rematch in the future.

Having her first summer vacation in the army, Trevor is tasked with taking care of her, much to his reluctance as his summer is always ruined. Some of the Rebel personnel on the island suspect that she is from the countryside, which she vehemently tries to deny. When the Professor unleashes a large quantity of boreal matter on the island, they poke her even further and she becomes visibly enraged. Nova protects her fellow personnel and bluntly states that she is a country gal, to which she screams and falls unconscious.

After recovering, she wonders why Nova is unaffected and is informed of what is causing everyone to act strange. She soon spots Fio trying to take Rumi's swimsuit and runs off to stop them from adding "more shameless history" to themselves. Having been told the best way to remove it is through physical or psychological means, Rita knocks out most of the Regular Army personnel vacationing on the island and is chastised by Madoka for hurting everyone.

Rita, being one of the more newer recruits in the army, partners up with Avvio against Reika. Though the two are defeated, Rita is awed by Reika's unconventional weaponry. The P.F heroes later leave base and entrust it to the recruits, just as an alarm goes off shortly after their departure. Rita immediately barges out to confront the enemy, scaring Norah and driving her off, though she decides to return to base with Reika and Avvio. The three are later attacked by Grazia and part of her Blaze Brigade, which is repulsed only when Grazia learns the P.F heroes are returning to base.

Marco and Eri show disappointment in the recruits, with Eri scolding Avvio. Rita believes she is safe, but Eri states that she doesn't need to discipline a savage animal like her.

Rita with both leg armors 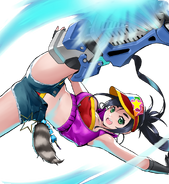 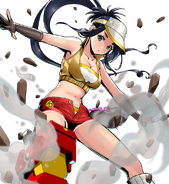 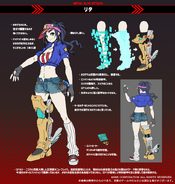 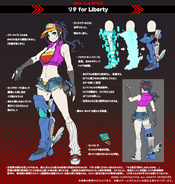 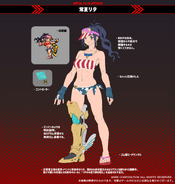