Rocky is Rita's cousin. Though they apparently haven't been in contact for several years, the two get along well with each other. Rocky helps remind Rita of important events and also enjoys spending time with her cousin, especially bringing justice.

Like Rita, Rocky's physical capabilities are very high. However, she excels in using her fists, whereas her cousin relies on her legs to defeat enemies. Her weapons were probably made by Midori, since Rita's were designed by the young mechanic. She enters the battle from above, transported by a single rocket straight into the enemy.

She dislikes flattery and such attempts are often met back with a powerful punch that sends the person reeling. She admits that she is a bit clumsy at times.

First appearing in "Try Line 9th", Rocky is excited to see her cousin Rita after many years apart. After a short conversation, Eri asks Rocky about her relationship to Rita. She tells her that she was excited to be in the same squad as Rita, but even more excited to debut with her. Roberto Nicola then compliments her, which she responds by sending him reeling in a single punch. Rita tells Rocky to be less bashful, as "city folk" are delicate people.

As the Regular Army struggles to destroy the Fortmeranian, Rocky arrives from overhead, crashing into the massive war machine with an inhuman sound. Inside, she rips the machine apart before focusing on Emma, who decides to retreat after witnessing her strength. Returning to base, Rocky reminds Rita to spend her Try Line coins before they expire and both are seen waiting on line. Tarma Roving soon passes by and compliments Rocky, who responds by sending him reeling with a single punch.

Following the operation, Rocky finds her cousin unusually depressed. Upon learning that she wishes to use weapons like everyone else, she reassures her cousin that she too initially felt uncertain if she belonged in the squad, but after some training she felt confident in her skills.

She later gets scolded by Sophia for destroying part of the base, but shrugs it off by stating that it isn't her fault the walls are weak. After listening on a call from Marco for assistance in a United Front, she convinces Perche to tag along, who had just been given a new suit. Perche saves a child during the operation and brings them to the base. Rocky offers to watch the child while she rests up, but the child refuses to leave Perche. The child tells her how Perche saved them and calls her a hero, to both of their surprise.

Rocky is later seen relaxing with both her cousin and Avvio when Elizabeth arrives and drags her off to fight the Ptolemaic Army. Before the battle could escalate, local villagers arrive and scold the two groups for fighting in front of the Water God, stating that the day is a celebratory time to thank the Water God for its supply of water. She is seen dancing with Caroline during the party. 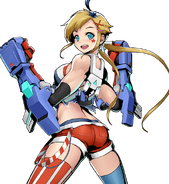 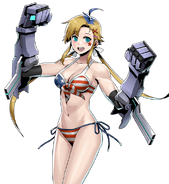 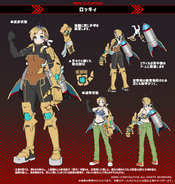 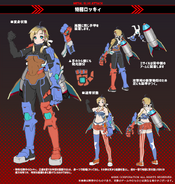 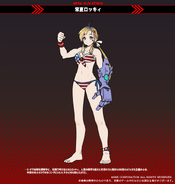