Rootmars (ルーツマーズ, Rūtsumāzu) is the leader of the Martians and the mastermind behind the alien invasion in Metal Slug 2. It is also the primary antagonist in Metal Slug 3.

Rootmars, also known as "The Motherbrain of Marspeople", has never been shown with any kind of distinct "personality", but it is said that its desire is to take over the Earth and vanquish everything.

The encounter with the Invaders shows that Rootmars is rational enough to be willing to co-operate with a former enemy if a greater threat presents itself. This also suggests a dedication toward its own race's welfare.

In Metal Slug Attack, Rootmars is shown to be much more mellow, genuinely caring for the wellbeing of its people as shown in Metal Slug 6. This was the reason why it allowed the Professor and Halle to join the Martians due to their values (the Professor's mourning of his Martian ally, and Halle sacrificing herself to save Pocket), though it has also accepted other members. The Martians believe that if they are near death, Rootmars will give them a vision to teach them an important lesson, and can empower them from afar. Rootmars also doesn't appear to have a desire to conquer the Earth, but to protect it from those that would harm its enviroment.

Rootmars plotted the invasion of Earth. The Martians backed up the Rebel Army with technology and resources to fight against the Regular Army. However, the Rebels were merely a tool to them, and the Martians were planning on allowing the Rebels and the Regular Army to weaken each other, then use this as an advantage to conquer the world.

After the Martians failed in their last attempt, they took on a new approach: abducting General Morden and sending one disguised as him to lead the Rebels and start a new coup d'état, causing numerous supernatural phenomena throughout the world. As that Martians were unmasked, they kidnapped one of the Regular Army commandos and made their escape, immediately pursued by the rebels and the Regular Army. Their ship Rugname was raided and Rootmars, who was controlling the ship using its brainpower, was put out of commission, thus triggering the self destruction of the ship. As the commandoes made their escape from the self-destructing ship, Rootmars made a last-ditch attempt to kill them, but was ultimately defeated and sank to the bottom of the sea, severely injured.

As Rootmars lay dormant under the sea while recovering from the previous battle, the Martians were left defenseless against their natural predators, the Invaders, who took the opportunity to conquer both the Martians and Earth. With the help of the Rebel Army, the Martians rescued Rootmars and after some misunderstanding, allied themselves with the Regular Army to counter the Invaders. If the player rides Rootmars in the 4th mission, then it — instead of Morden — will appear to rescue the players at the end of the final mission.

While Rootmars doesn't make an appearance, some Martians are seen rescuing Morden and his army. This shows that the Martians are once again allies to the Rebel Army.

Rootmars Unit Details described as Rootmars joined in Regular Army to fight against The Martians. It is possible as Rootmars was betrayed by Martians, after his former subordinate joined the alliance with Invaders. Because in a faction unit bonus system in Metal Slug Defense, the Martians and the Invader factions are the same faction.

Rootmars is a playable unit in Metal Slug Attack, where it comes in numerous forms; the original Rootmars, Rootmars Slug (as a Regular Army unit) and an "X" variant.

Rootmars made its first appearance in-game in the Extra Ops "Alien vs. Morden", where Rootmars was revived by the Invaders and turned against its own people and the alliance made with Donald Morden. Morden is able to snap Rootmars back to its senses, fortunately.

It also appears in various stories, primarily to give visions and empower Martians as shown with the Marty and the Mars People Rangers. In the first summer, Rootmars was tired from all the strain it had, and became temporarily berserk, but was returned to its senses by Trevor Spacey and Abigail. It expressed gratitude to the two before it left Earth.

In Metal Slug 3, during the Final Mission in the Rugname, the first encounters is a giant Martian, complete with tentacles, connected to the ship's core via large cables into its brain. It has several stitches running from its "chin" to the ring of cables, intended to mark some sort of surgery-like procedure when the cables were attached to its brain. Later on that form was revealed to be a "Fake" Rootmars on Metal Slug Attack. The real one is encountered at end of the game's final mission, it appears as the mothership self-destructs, it having a pair of large clawed arms with two digits reminiscent of a Tyrannosaurus rex (instead of tentacles) and a mouth that can spit acid. Its brain is its weak spot, just like the "Fake" counterpart. 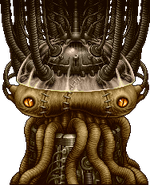