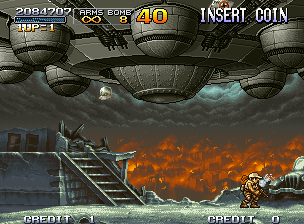 The Rugname is the Martians' main mothership that serves as the final boss in Metal Slug 2/X.

The Rugname serves as the Mars People's mothership from which troops are dispatched. It is very heavily armored, and far too large to destroy with regular weaponry.

According to its concept art, the Rugname is only 140 meters in length and 23 meters in height. However, during the second "vertical space shooter" segment in Metal Slug 3, the player spends several minutes flying through the Rugname. The official explanation for this is that the hallways of the Rugname are arranged in a giant spiral, allowing for a large continuous corridor from the rim to the center. However, its description in Metal Slug Attack says that its size is that of an entire city.

The Rugname can be temporarily defeated by destroying its attached Dai-Manji. However, the only way to destroy the Rugname for good is by attacking the Martian leader Rootmars, who controls every aspect of the ship with its brain. Forcefully severing Rootmars from the ship results in total system failures, causing the ship to collapse into the atmosphere.

The Rugname's only weapons on the underside are channeled through the attached Dai-Manji. The Dai-Manji's deadly electric beam is replaced with a devastating particle beam. Luckily, the cannon can only be aimed straight down, so it relies on its infinite supply of elite, extra-durable Mini-UFOs for additional defense.

The Rugname's massive size makes it an easy target; all the player has to do is aim upwards. Because the cannon will always hit the same spot, the larger threat is the unlimited horde of Mini-UFOs.

Grenade Soldiers, Shielded Soldiers, and Girida-Os assist the player as extra damage and as shields from the Mini-UFOs lasers. Halfway through the fight, an invincible Landseek backs up with an SV-001 on its back. In Metal Slug X, Hyakutaro is also brought in. The Landseek will leave after a few seconds, taking the parked SV-001 and still tied Hyakutaro with it.

After a long fight, a Rebel piloting a Eaca-B will make a kamikaze attack into the Rugname's core, making it retreat into space. The Dai-Manji detaches and explodes, releasing Morden who is chained up to a metal slab.

The Rugname returns as a miniboss and serves as the location for most of the game's final mission. The Rugname only uses the Dai-Manji's default electric beam. The battle is also much shorter, as it occurs only a third on the way through the final mission.

The Rugname appears as a playable unit. It only uses its extermination laser as its attack, relying on Mini-UFOs for long range attacks. It and its upgraded form, the Rugname X, also require a high amount of AP to deploy, and both are of the few units which are over 1,000 AP. The Rugname is treated as a ground unit, so projectiles will home upwards and hit it.

Halle's Mars People Pocket calls in the Rugname to use its extermination laser. They later resort to borrowing part of the ship as they feel ashamed from being constantly protected by the mothership.