Rumi's primary intention of joining the Regular Army is because of her mother diagnosed with a heart condition as well as her older sister, Madoka, who was physically weak, so that both of them can make use of the Regular Army's medical facilities for treatment.

During her training, she was accidentally shipped to the frontlines after a paperwork fiasco and, despite the fact that her training was not yet completed, she manages to escape fighting unscathed and without capture.

After the first conflict with the Rebellion, Rumi is given a chance to resign from her position, and carry out the rest of her life as a civilian. She declines the offer and transfers into the Regular Army's Intelligence Division.

As a supply sergeant, she packs an incredible amount of cargo into her backpack and tries to deliver them to the friendly forces, out in the battlefield, in hopes to help them win. However she has a horrible sense of direction and often gets lost. This results in her appearing out of nowhere and vanishing without a trace, gaining her the nickname "The Wandering Ghost" by other soldiers.

Her sister, Madoka, also appeared to have joined the military but in a bid to be more fit. Like her sister though, she too has been thrown to the frontlines by problematic paperwork and often wanders off within the battlefield. Rumi is constantly worried about her sister's health even when not in the battlefield.

Rumi is also known to talk incessantly, and has been known to occasionally sass back to superior officers. She was also seen piloting a Hi-Do copter in Metal Slug 3D and Metal Slug 7/XX.

Rumi is a young woman with blue eyes and blonde hair in a ponytail. She wears an enormous backpack full of supplies, green wrist bands, a white blouse tucked into a green pair of shorts, a dark belt with a silver buckle around the waste to hold her shorts up, white socks rolled up to her knees and green boots.

Unlike other POWs, Rumi is not found tied up, rather just mindlessly wandering around. Tagging Rumi will cause her to fall on the ground, dropping whatever item she's holding, and flee after a salute. If Rumi walks enough steps without being tagged, then she'll drop the item and run away by herself, forfeiting a POW bonus. The player is able to shoot her backpack for more items at the expense of making her walk faster.

Metal Slug X Only, Mission 1: Inside the 3-Ton Utility Truck

Metal Slug 2/X, Mission 3: Walks on-screen after a short time on the boss.

Metal Slug 3, Mission 1: Watch your shooting when fighting at the large ship as stray bullets can hit her off-screen.

Metal Slug 3, Mission 4 (Underground Route): The Drill Slug may not be enough to reach her.

Metal Slug 6, Mission 4: Walks on-screen at the place where the route splits. 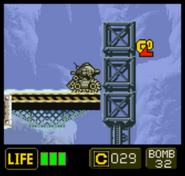 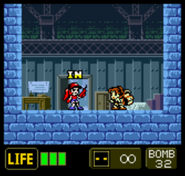 Rumi makes her debut appearance in the PlayStation 1 version of Metal Slug in the Another Story mode after clearing Chris Key's story. Her appearance is different than in Metal Slug 2 onward. In the game's manual, she is a brunette dressed in a flashy and revealing medical outfit while in-game she's blonde and wears purple shorts, blouse, and boots.

Her side of the story revolves her and a group of soldiers disguising themselves as old men and willingly surrendering to the Rebels to acquire information and act as a location point for Marco's Special Forces. After a week in captivity, Rumi gets tired of waiting for Marco to arrive and rallies up the group to leave.

Alexander Suvorov soon stops Rumi and accuses her of being a reckless and giddy idiot. He then challenges her to apply the Regular Army's special technique of hiding objects in their pants. She succeeds and Suvorov allows her to run towards Marco's group. However, Suvorov later finds out that Rumi went in the wrong direction towards enemy lines and sends his troops after her. She is found unharmed and apologizes for her error.

In the end, the overall operation has been a success. Rumi believes it's due to her being more active in her role than everyone else and hopes she'll be promoted to a Super Devil if she continues working hard.

In Mission 24 (The Ice Queen), Rumi can be found hidden inside a small room that is accessed by doing a Metal Slug Attack on a specific gap; she gives the E-Armor to the player. Rumi can be only be rescued if Red Eye completes Mission 22 (One Fell Stroke) with the Slug Flyer intact. Every other route puts Red Eye in the final stretch of Mission 24 rather than in the beginning. Tequila always starts from the beginning.

Rumi shows up in the game's bad ending as a nurse tending the hospitalized player characters who got blown up in the final mission. She does not appear as a supplier in the main game.

Rumi becomes a more prevalent character, showing up in cutscenes and working as mission control for Marco and company. Rumi also gives the player access to the Garage, where they are able to modify their Slug to be deployed in missions.

In this game, Rumi slowly supplies Action Points (or AP) to deploy units. At every specific threshold, her icon turns from red to green allowing the player to level her up. The rate of AP supplied goes faster and more AP can be held (up to 9999 AP) as the level increases. At level 10 (MAX), Rumi stops walking and stands still at a salute. When a new mission starts, Rumi starts back to level 0.

The player is able to increase the AP supply speed and limit permanently by paying MSP per level up.

Rumi's role as the AP supplier is functionally identical as its predecessor. The AP cap has increased to 99,999.

Rumi becomes a playable unit in the "Amadeus Revenge" event as a Box Crank unit, complete with new animations. While she doesn't seem like a competent fighter, with her close range attack being a nervous flailing of her arms, she has strong arm strength, able to toss multiple grenades at once from afar.

Her special revolves calling the Regular Army Helicopter and throwing items onto the battlefield while on the rescue ladder. The items can be picked by the player's units: the Heavy Machine Gun temporarily increases attack strength and Bomb Crates instantly recharges a unit's special. A unit cannot pick up another item when their attack bonus or their special attack glow is still active, respectively. These items eventually disappear if not picked up.

Rumi makes her first appearance in "Amadeus' Revenge", accidentally stumbling into the Doctor's base. When he tries to kill her with his new Type γ Mother Computer, she dodges the lasers before clumsily throwing grenades at the ceiling and miraculously landing on the Mother Computer, destroying it.

Rumi is eventually called to help support Howell during Christmas, much to her disdain as she wished to party with her sister. With the assistance of Trevor and mercenaries, Howell is able to repel the Rebel Army, but upon hearing of a call from help against the Ptolemaic Army, he drags Rumi and Trevor with him, much to her disdain.

The next Christmas, Rumi is eventually selected as a "VIP" by Marco as part of a on-field training exercise. She is escorted by Leona and Ralf to the party venue, where Rumi's emphasis on her escorts following her orders completely results in them running into the Rebel Army. After children emerge from the Iwa Oh, Ralf and Leona begin to play with the children for the entire day, causing Rumi to miss out on the party a second year in a row.

In "Endless Summer Vacation", Rumi blurts out to Beatriz on the beach in a kerfuffle that she and Madoka tend to do their activities (such as eating their meals and sleeping) together and other revealing facts, much to Madoka's horror.

Rumi is a playable support unit only boosting her allies' stats. She stands as far back as possible on the battlefield. Although Rumi has no weapons, she can operate Slugs.

A seasonal variant, called Witch Rumi, has her on a broomstick. She attacks by shooting a long purple bolt at the direction of the closest enemy unit. 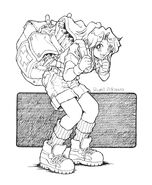 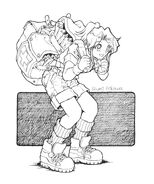 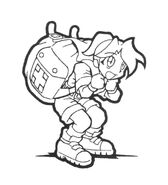 Rumi's walking animation in most games.

Rumi as a nurse 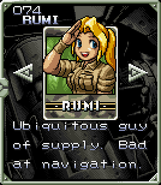 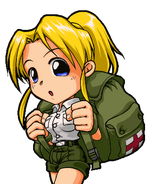 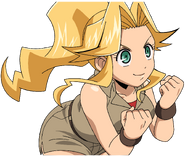 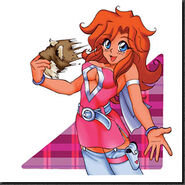 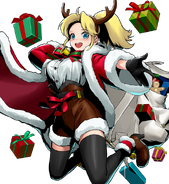 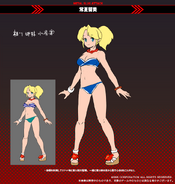 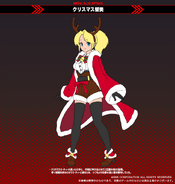