The SV-002 was a Super Vehicle by the Regular Army that was planned to be the successor to the original Metal Slug tank, but never introduced anywhere in the series. It has only appeared in the concept art for Metal Slug: Super Vehicle-001.

The SV-001 Metal Slug, though an effective weapon, had its problems; the turret is top-heavy, making the tank susceptible to tipping over at inconvenient moments. Along with that, the SV-001 also has a high radar cross section, making it vulnerable to high-speed guided missiles. Also, the 127mm main cannon, though a powerful weapon, had very limited range.

The engineers of the Regular Army developed a redesigned version of the Metal Slug, the SV-002. This new Metal Slug tank features organically-shaped, streamlined armor plating and a lower radar cross section. It also has a new main cannon, which is smaller in bore than the original cannon of the SV-001. The shells of the SV-002's cannon travel at a much further distance with better accuracy than with the 127mm high-explosive shells, but can still deliver a heavy punch.

The tank also has another defining weapon; instead of the 12.6mm caliber Vulcan cannons as in the original Metal Slug tank, the SV-002 features a pair of transformable gun pods that each has a machine gun and a missile launcher that fires guided missiles. While the new machine guns are weaker than the original Vulcans, the missile launching component compliments them for extra firepower. The missile launchers can be used when the barrel jackets of the gun pods are in an opened position. Each gun pod is powered by its own energy pack, independent of the tank's main powerplant.

The SV-002's cockpit had a minor redesign for reduced fatigue on the pilot, as well as a new engine, upgraded navigational systems, and new tracks. 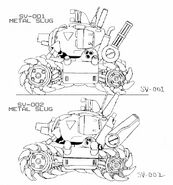 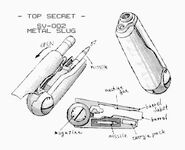 In the Metal Slug Defense preview image on the Google App Store, Play Store, and Steam
Community content is available under CC-BY-SA unless otherwise noted.