A young assassin, Sally was hired by the Ptolemaic Army to protect Lord Ptolemaios from those who would harm him behind the scenes. Mira rewarded her talents by subjecting her to an empowering ritual, which she took.

Although she acts like a child, Sally uses her superhuman strength and speed to clear enemies with devastating effect. She enjoys the sight of blood and appreciates the darkness and creepy places.

Sally is often seen wearing gothic-themed clothes and also puts an amaryllis motif ornament on her hair when going out on missions. The scythe she uses is her most favorite and regularly used weapon, with the blood of slain enemies soaking its blade red. It also has a skull motif.

Sally makes her first appearance in "Killer Scythe", where she is called in for a mission to hunt the Red Goblin. She is slightly upset that she has to bring the Ptolemaic knights as her support, and gets into several humorous accidents while preparing, obtaining Maria as her partner for the mission. They soon find one red-haired man, who Sally believes to be the Red Goblin, though Maria knows it isn't who they're looking for. Roberto's partners, Eri and Tarma, arrive to defend him. Sally avoids all of Eri's attacks while Maria battles Tarma. During the battle, Maria notices another red-haired man with a woman, prompting her to leave and pursue them. Upon learning from her enemies that Maria left to pursue another target, Sally withdraws, stating that they're lucky to be alive.

While on another mission, Sally encounters Fedeln Metzelei and is able to sense the guilt and fear he has, offering to be his friend (although in her usually sadistic manner). Fedeln eagerly accepts, before Barbeln arrives to protect him. Fedeln states that he liked the cute flower on her head, which Barbeln interprets as tasty, much to Sally's concern. Barbeln then states that he needs more Invader companions and not weird lifeforms as friends. Sally is upset that the two left her out of their conversation as the two Invaders leave the scene.

During a battle against the Rebel Army, Sally runs into Donald Morden, upon which she states that he will be her 666th victim. Morden takes the threat seriously, which upsets Sally as she was just joking around.

Sometime later, Sally is idling about at a Ptolemaic base and stops Maria from killing her own subordinates as she had been possessed by her treasure. Sally tricks Maria into getting strapped on a Black Hound and sets it off to an unknown location, who ended up getting intercepted and saved by Matilda. While waiting with the rest of Maria's knights as they prepared a meal, Sally grows hungry and begins eating despite the knights insisting they wait for Maria to return.

She first appears in "Diaphtora Genesis" where she accompanies Mira, Damian and Achetto to revive Ptolemaios. Upon arriving, two Ptolemaic guards refuse to let them through, in which she kills the two of them much to Damian's chagrin, as he wanted to negotiate their way through. When they reach the ritual site, Mira takes Damian with her, which upsets Sally as she wants to go with Mira. Damian tells her that he'll let her go if she can best him in combat, but Mira stops the two of them as they have no time. Mira convinces Sally to stay put and guard the site by promising to take her into better "hunting fields", the prospect of which is enough to convince her to remain on guard duty, and witnesses the ritual. 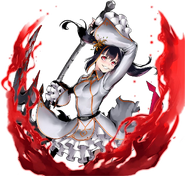 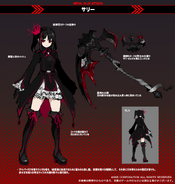