One of the four Metzeleis, Schwarz Metzelei was transferred from another galaxy to Earth, as part of Annette's plan on attacking the planet. Her extremely aggressive personality with an insatiable appetite can make her dangerous to her allies, as she tends to eat them by accident when in a feeding frenzy. She does not like being disturbed while eating.

She uses her tail as a means of fighting her enemies, and is capable of using it to suck the life from her enemies to replenish herself.

Following her awakening, her tail mutated into four separate segments and her tail as a whole became barbed, allowing her to feed quicker.

First appearing in the Extra Ops "Fall of Disaster", Schwarz is sent by Invader high command as part of their plan to see how the Amadeus Syndicate would respond to the attack. This report was filed in by Annette, which mentioned them as the strongest in technological capabilities.

Upon arriving, Schwarz tries to eat Annette, though she fails. She warns Annette not to get in her sight, or she may accidentally eat her. Schwarz and Annette attack the Amadeus Syndicate, and she's pleased throughout the course of the operation, consuming both humans and robots alike. After dealing enough damage, Annette tells her to withdraw, though she refuses to as she wants to feed more. Schwarz reluctantly withdraws when Annette threatens to leave her on the planet, before she realizes that she can just come back later with the other Metzeleis and resume her feeding.

Schwarz reluctantly returns to Earth with Franke after Fedeln informs them that their leaders have tasked them with capturing a Golden Slug Gunner. She saves Franke after the latter is blown apart by the Regular Army. As payment for coming to Earth and saving her, she eats all of her United Coins.

When Franke returns to Earth for another experiment, Schwarz is partnered with her again. While heading to Earth, she falls out of the spaceship through a hole she made during transit. She ambushes Ralf and Reika, injuring the latter. This enrages Ralf, who puts up more of a fight and increasing Schwarz's desire to consume him. Eventually she is forced to retreat after jeopardizing the mission, and in anger leaves a gaping hole in Franke's body.

Schwarz is busy eating when Geweih Metzelei contacts her and Bloom Metzelei. Schwarz tells him to shut up, as he is disturbing her feeding time, only to be scolded by Bloom. When Geweih entrusts the two to safeguard their new land, she complies with a rather expressionless response.

Schwarz soon becomes the first of the four Metzeleis to "awaken", surviving the process. Annette is later tasked with accompanying her to Earth, where the pair encounter a Flame Caterpillar, the prime predator in the area which calls in minions to dispatch the duo. They kill the Flame Caterpillar, causing its minions to disperse. Schwarz feeds on the Flame Caterpillar, but she becomes full almost immediately, due to having four tails which speeds up her eating process. Unexpectedly, she sleeps on Annette upon being full, causing her to carry her back to the ship.

Sometime later, Schwarz claims to have been dumped and abandoned by the Pentagram onto an obsolete star system where the quality of the food upset her. Schwarz is somehow able to escape and heads to Earth to get better food, attacking fellow Invaders Ai Agate and Citrine. Agate stops her from attacking Citrine or the elephant, allowing her to feast on humans instead, which she begrudgingly does. However, the humans flee from her and Agate becomes irritated that she is still trying to eat Citrine and the elephant. Schwarz snaps and calls Citrine a "nasty" invader, which ends up with Agate threatening to cut her stomach open. Realizing her error, Schwarz leaves Earth.

She first appears in Nowan's flashback in the similarly titled "Fall of Disaster" story where she personally led an invasion on Nowan's planet. She took an interest to Nowan and spared them for later consumption. Somehow Nowan managed to avoid being eaten and was recruited into the Invader Army.

Annette pairs up Nowan with Schwarz back to Earth much to their horror and Nowan's memories resurface again causing them to be extremely nervous. Schwarz has apparently forgotten the incident but because of Nowan's reactions, later attempts to eat them but they are saved by Odette. Upon crash-landing on Earth, she embarks on a feeding frenzy on the Rebel facility but is disgusted by the taste of the "low-quality" humans. She soon takes an interest to Navy as she is different from the others but she proves to be rather troublesome to catch as Vita is supporting her. When Navy unleashes the Iron Vermilion on her, she easily destroys it and severely damages Vita.

Upon taking a taste of the Vermilion's remains, she becomes addicted (as it was created with Martian assistance like the original) and forgets Navy. After she fills up she tries to leave but realizes that her ship is destroyed and her allies gone, so she calls Annette, who hangs up on her due to attempting to eat Nowan and harm Odette. She soon calls Fedeln Metzelei for a ship but is given a sob story instead. 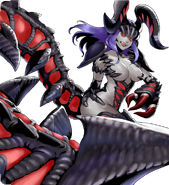 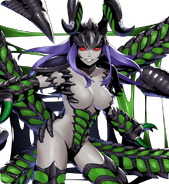 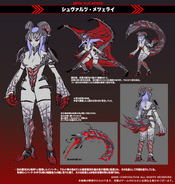 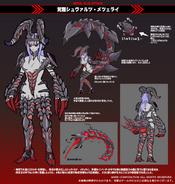