Collecting treasures from around the world
Scotia Amundsen was an original character exclusive to Metal Slug Attack, first appearing in the Extra Ops titled Mummy's. Her alternate universe self also known as Scotia Amundsen appeared in Metal Slug: Awakening.

The daughter of Scott Amundsen Jr., she travels the world in search of him. Both are treasure hunters, showing a particular interest in "Arabian Tears".

Not being affiliated with any faction, Scotia usually travels around the world with her treasure-laden camel. In battle, she uses a revolver with great skill, shooting at various angles which can also bounce off various surfaces to great effect. When accompanied by her camel, if the battle becomes too dangerous for her, the camel will bring her away to safety.

She first appears in "Mummies", where she defeats the Pharaoh and claims the Arabian Tear.

Continuing her search for her father, Scotia is then led to a Rebel Army base and tips off Wendy, who she had met during her travels. Although Wendy finds plenty of treasure, the actual "treasure" was weaponry, which Grazia tries to use on them. Wendy uses her combat kendama to flee from the base, with Scotia following suit. Curious to see what Aileen's pirate crew was like, she asked Wendy to bring her onto the ship next time before they departed ways.

Scotia is first encountered in "The Pharaoh's Treasure", where she opens a door, unaware of Beatriz and Allen Jr.'s presence. She later encounters them and explains her story to them, though the two don't seem to care as much. She falls under the Pharaoh's curse (due to thinking of her father), and wakes up later when Beatriz defeats the Pharaoh. Allen Jr. allows her to board the ship, since she wanted to go to the next set of ruins in hopes of finding her father.

She later appears in "Ωmegalpha", where she wakes up the Red Goblin from a nightmare. She apologizes after Vatn chastises her for disturbing his privacy. Vatn later explains his plan to the Red Goblin. Scotia's involvement in the plan is revealed; she simply wants to speak with Ptolemaios to find her father's location. Vatn tasks Scotia with finding where Ptolemaios is before attacking the enemy base. During the chaos, she and the Red Goblin enter the base. Scotia runs into Caroline, who mistakes her as a recruit due to her scarf before taking her around the base. She still manages to pinpoint Ptolemaios' location, though she is unable to go due to being stuck. 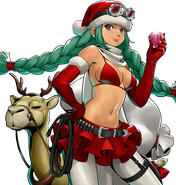 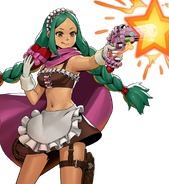 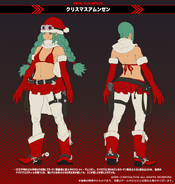