Sekhat is a new character introduced in Metal Slug Attack.

As a human, Sekhat was a renowned warrior known for her skill in battle, which in turn allowed her to serve as Cleopatra's bodyguard from a young age. She recalls having to fight every day to survive. She was eventually made a priestess and gave up her heart during the ceremony of eternal life.

Even after being made a mummy cat, her resolve to continue her duties remains unfazed as if she was still human. She takes her orders seriously and ensures that the tasks given to her are completed. She also admires her employer's destined relationship with the Pharaoh.

In battle, she wields a special snake-like staff that serves as both a melee and ranged weapon, burning all in her path.

First appearing in "Sand Rabbit", Sekhat awakens after resting for thousands of years. She wakes up to find Cleopatra and her fellow priestesses, as they had sensed her awakening. She immediately begins following Cleopatra around, much to her employer's discomfort. When the other priestesses detect enemy forces arriving, Cleopatra tasks Sekhat with removing them from the premises. Intercepting the intruders, Sekhat is assisted by Ramal and the two drive the enemy away. Having only woken recently, Ramal is worried she has overexerted herself, but Sekhat insists she is fine, having done this in her human life. The two then return to the ruins.

Sometime later, another priestess, Wepset, awakens and sets off to protect Cleopatra from perceived outside threats. Cleopatra orders Sekhat to accompany Wepset, much to her disdain as she wishes to stay with Cleopatra. During one of Wepset's stops, she finds a suspicious person and trails them as she could sense their hostile intent. Sekhat arrives and recognizes Aisha as a "burden" to the Rebel Army, watching her fight Wepset. Wepset ends the fight by placing a poisoned ring on Abul, prompting Aisha to retreat with him. Sekhat insists they return to the ruins, although Wepset is persistent on eliminating all threats in other places. Sekhat commandeers the Iron Nokana and they drive to the next town. 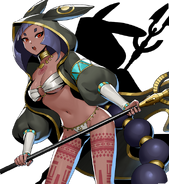 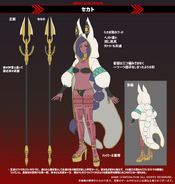