Sharl is a pure-blooded vampire who serves as an enforcer for Agalia. Her powers and duties to enforce vampire rules have led to many vampires fearing her and she has built a reputation as the "Executioner". She spends her time investigating leads on vampires that have committed crimes and punishes them accordingly by putting them to "death", sapping their powers to use as her own.

She doesn't hold a high view of humans, but doesn't loathe them either. Likewise, she is disgusted by vampires who rule others through fear and go on rampant sprees.

First appearing in "The Executioner", Sharl learns of a rouge vampire residing in a town and brainwashing its local inhabitants to feed them. She confronts the vampire, who attempts to use their brainwashed servants as protection. Sharl swats the two aside, before charging the vampire with the crimes of fleeing Agalia's lands and brainwashing humans, sentencing them to "death". Due to this, Eri and Otto attack Sharl with the Slug Trolley Type-B, but she crushes it with ease. She warns her that she has no quarrel with them, stating that she's here for Otto. Otto flees to protect Eri after sensing she is going to die protecting him, so Sharl informs the Eri and Fio that lycanthropes are her race's enemy and that they must die before she leaves to chase after him, although he is able to throw her off his trail.

She is later sent to investigate Grace due to reports of constant bloodshed. She manages to track Grace in an unknown city and witnesses her crimes first-hand. Before she could administer punishment, Grace orders her vampires to restrain her. Sharl vows revenge on Grace for making a fool out of her, vowing to hunt her down and shred her apart for her crimes. 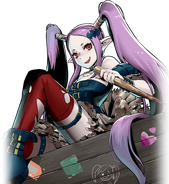 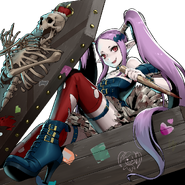 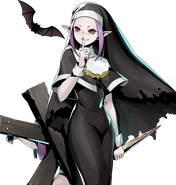 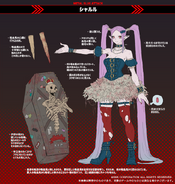 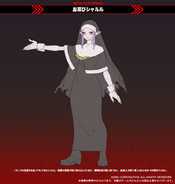