Firing a pistol
Slashing with a machete

The Shielded Soldiers are an enemy in the Metal Slug series.

These riot-shield-wielding troops serve as a line of defense to help protect the main body of the army from enemy fire. They usually focus on shielding their teammates rather than returning fire, as attacking leaves them vulnerable, but in a pinch they can attack with machetes and handguns. Their shields can take quite a lot of punishment, and can quickly nullify the otherwise-powerful Laser Gun, but enough bullets will knock the shield out of their grasp, typically causing them to flee in terror. Because they protect more dangerous enemies such as Bazooka Soldiers from your attacks, they can very easily make your job difficult. Fortunately, explosive or powerful weapons such as Grenades, Rocket Launcher and Shotgun can often blast through their shields or circumvent them outright.

Shielded Soldier: Taking position at the front of a formation, they either stand in front of their teammates to absorb fire or approach the player under the cover of their riot shields. They also carry machetes to swipe at the player up close, and Murder .50AE pistols to shoot at players from above, below, or at medium to long range. Each soldier can shield 15 shots of pistol before they will lose the shield and flee in terror. Some brave ones will attempt to attack the player in the same way as the fanatics do.

During the fight against the Rugname in Metal Slug 2/X, the player can hide behind a Shielded Soldier to protect themselves from the Mini-UFO's lasers. The shield can also be used as a temporary platform for both the player and the SV-001 when the Soldier lifts it upwards.

In Metal Slug Attack, some Shielded Soldiers serve as Beatriz's bodyguards and a few can also be seen enraged in combat, perhaps being members of Allen Platoon.

In Metal Slug Attack however, the Amadeus soldiers sport a purple uniform.

Ptolemaic Shielded Soldier: The Ptolemaic Army deploys their Shielded Soldiers much like the Rebels do: either in front of a squad to absorb damage, or approaching the player directly under the cover of their riot shields to slash them with machetes. If above, below, or out of melee range they will fire at the player with their pistols. They often flee once they lose their shields.

Future Shielded Soldier: They use a force field that protects them from every side. Once the barrier reaches its limit, it will shatter, leaving the soldier exposed to enemy fire. They flee all the time of being unarmed. They do not attack using a machete, instead they use an electric hand, punching the player.

A Rebel shielded soldier on the Walking Locomotive. 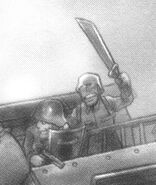