Sho is a young ninja training under Yoshino as her apprentice. Despite being well-trained, Sho has no confidence in both himself and the skills he learned from her due to his master's unpredictability. He is quite fearful that if he disobeys her orders, she would kill him, even though she continually leaves him in life-threatening situations.

Sho specializes in air skills. and his specialty skill is "Air Rend", in which he readies one of the kamas like a rope and tosses it at the enemy.

First appearing in "Growing Ninja", he is training with Yoshino when they arrive at a supernatural spot. He is uncomfortable with training there but still complies nonetheless, not wanting to anger Yoshino. Yoshino soon detects enemies coming and they narrowly dodge a meteorite. Schwarz Metzelei and a Flying Shelt appear; she has been tasked with disposing of the Ptolemaic Army as they have been a thorn on their side.

Yoshino tells Sho to defeat the enemy alone and seemingly abandons him, much to his fear. However, he manages to muster enough courage to use "Air Rend" against Schwarz and wounds her. Schwarz retreats with the Flying Shelt, prompting Yoshino to come out. Sho is delighted with his victory, but Yoshino slaps some sense back to him, as he is in still training and not ready for more battles.

Continuing his training with Yoshino, they soon spot an Amadeus facility in the distance. Deciding to use it as practice, Yoshino forcefully sends Sho into the facility, where he is confronted by a tank with a holographic bear, which terrifies him. He resolves to destroy it, and signifies his success when Yoshino and Dragunov spot smoke coming from the facility.

He's later tasked with transporting a Space Union with Mizuna. Sho expresses nervousness about Mizuna picking the fastest route which was also rumored to have bandits, which becomes true as four girls ambush them. Sho is perplexed at Mizuna's desire to fight since he is a ninja, but helps defend the Space Union with him. He flies into a panic when he fires missiles at them, fearing that Yoshino will kill them as they were told not to use it. When one of the girls causes a scene, Sho assists Mizuna in escaping by using his ninjutsu.

He assists his master in the rebellion, where he discovers an ancient treasure under Ptolemaios' custody, relaying the information to his superior.

As he continues to practice under Yoshino's watch, he is startled by her breaking a rock while meditating. In the resulting United Front operation, Yoshino orders him to handle the enemy army alone. When he expresses doubt, Lithos comes in and offers to help, although Yoshino orders her to leave him in a random spot to fend for himself.

Sho continues to train with Yoshino, though he begins to wonder why they are training so much. Yoshino tells Sho about her past and how she originated in a ninja village and trained under the watchful eye of their elder. While fighting the Arabian Army, Sho learns why Yoshino is intent on training him feverishly and also learns a new technique, one which was passed down by the village elders to Yoshino herself.

During the rebellion, Yoshino takes Sho with him to defend Caroline from Mira and Damian. Yoshino asks Sho to blind her, and as he does, she does the same to him, causing him to writhe in pain, much to her disappointment. They attempt to fight the pair but are defeated and routed off. 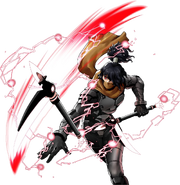 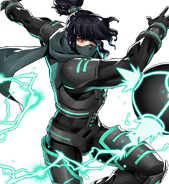 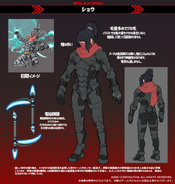 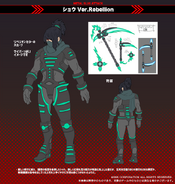