Shoe & Karn are the bosses of Mission 4 from Metal Slug: Super Vehicle-001.

Shoe & Karn are a pair of super-heavy tanks created by the Rebel Army for cooperative mission. They are each armed with one main turret-mounted cannon, two sub-cannon turrets on the front, and a missile launcher on the back. Two side-mounted hatches allow soldiers to help defend the tank as well, usually with bazookas or rocket launchers.

Beyond the color palette, the only difference between the two tanks is that Shoe's missiles fire off of a ramp. In Metal Slug Defense and Metal Slug Attack, Karn and Shoe's names are swapped, so Karn is the one with the ramp.

In Metal Slug SV-001, they appear as the game's fourth boss. They are each piloted by Sergeant Sagan Gail and Corporal Logan Gail (セーガン・ゲイル & ローガン・ゲイル). Their pilot uniforms also reflect their respective tank's painted highlights. Both tanks in this game have a ramp, so it is unclear which driver and tank is which.[1]

The tanks are fought at the same time, Shoe on the top floor and Karn at the bottom. They drive from side to side. If the player is in front of a tank, it will fire its main cannons. If the player is behind it, a Rebel will fire a bazooka at the player from a hatch on the side. Regardless of the player's position, they will take turns raining missiles on them. Should either one of them is destroyed, the surviving tank will start firing its missiles faster than usual. Although they can run over a human enemy, they will not be able to move if the player blocks them with the SV-001. 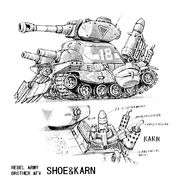