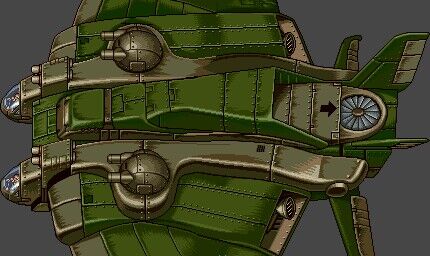 The F-502 Shooting Ray is the second boss of Metal Slug 5.

The Shooting Ray is a large aircraft carrier created by the Ptolemaic Army that specializes in air combat.

In Metal Slug Attack, a miniature and remote-controlled version was developed and controlled by a mechanic named Caroline. Caroline has further developed the mini version into a long-ranged attack and recon drone.

The F-502 Shooting Ray has two attack patterns based on where the player is positioned: