The Slug Gunner is a Regular Army Super Vehicle from Metal Slug 5.

The ultimate evolution of the SV-001, the SVW-001 Slug Gunner was developed by the Regular Army engineers based on the Rebel Army's LV Armor. The Slug Gunner can change between mech and tank forms, and is equipped with a huge 180mm cannon, a 60mm Minigun and jets that enable it to jump high or perform a double jump. It also comes with a pile bunker for melee combat, which uses a revolver-like mechanism (its cylinder holds six cartridges) to empower its blows.

The Slug Gunner is cumbersome. It moves and turns around at a ridiculously slow pace when in mech mode. Players can crouch to transform into tank mode and enable the Slug Gunner's treads to move as fast as the other Slug variants. In tank mode, it cannot attack enemies from behind but is able to run over enemies if needed.

The Minigun isn't as free moving as other Slugs as it can only shoot where the Slug is facing or above it. However, its Minigun can spread its shots to somewhat mitigate its inability to shoot diagonally. Also, the Slug Gunner must jump and shoot downwards if the player needs to attack enemies from below. The pile bunker is used as a melee weapon; it is slower than the Minigun, but does a lot more damage per hit. 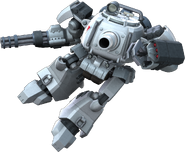