Mastering any type of sports

When she was attending her junior high school, she dreamed of becoming a basketball player. After she graduated, she enrolled into a military academy. Her ability to excel in sports enables her to graduate as an official member of the Peregrine Falcons. Despite her wishes to become a member of special intelligence service in the Regular Army, she had to give up when her parents disagreed. However, she desperately wanted to stay in service and finally enrolls as an instructor. After three years of trial and error, she obtains the ability to cheer up the trainees and guide them into becoming an effective soldier, but yet still remains as a very hard instructor.

After the first war between the Regular Army and Rebel Army, Sophia retires and raises a family, something that Margaret is jealous about.

Sophia, alongside Margaret, return in the later two Pachislot games. She appears in various cutscenes as the more serious of the two.

In Metal Slug 3, one cutscene has her cook for the player, the dish changing depending on the player's performance. Another cutscene has Sophia showing Marco a large paper to him that also changes in appearance. Unique to this game, she has curly hair and wears a white hat and black pantyhose under her dress.

Sophia and the rest of the combat school instructors appear in Metal Slug Defense's Mission mode.

In Metal Slug Attack, Sophia hosts the game's Combat School with unique sprites. In the Extra Ops and Another Story cut scenes, she's a commander of the Regular Army, having apparently been promoted.

Sophia is the player's mission command and the game's main announcer, speaking throughout gameplay and the various menus. Sophia is voiced by Mina Tominaga, who also voiced her in Metal Slug's Combat School and provided the vocals for the end credits song "Hold You Still".

Sophia offers what is called "Sophia's Encouragement" where, for US$8, Medal rewards from Returning is doubled twice a day, and Soldier and Gold Mine level up costs are lowered by 1000% for 30 days. 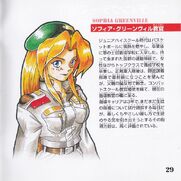 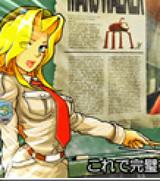