Sorceress is a new character introduced in Metal Slug Attack.

Sorceress does not have a name of her own; she was created by Ptolemaic scientists using Damian as a base. She has trouble remembering her own past, but is known to be a troublemaker and has a habit of saying "somehow" when she speaks.

In battle, she uses a scythe-staff hybrid that allows her to conjure magic to attack enemies, while darting across the field to quickly reach them.

First appearing in "Stray Ghost", Sorceress somehow finds herself in the border between life and death, where she greets Damian after he wakes up. She is rather rude to him, but when he manifests his power to clear the otherworldly monsters, Sorceress manages to avoid his attacks by flying in the air. She spots an opening that allows the pair to escape, and she accompanies him to a Ptolemaic base, where he boasts his powers to Achetto. A weary Achetto then expresses an intent to cleave him in half, with Sorceress voicing her support for the suggestion. 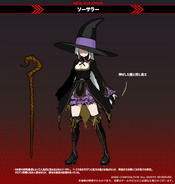